Now When You Talk to a Plant, It Can 'Talk' Back 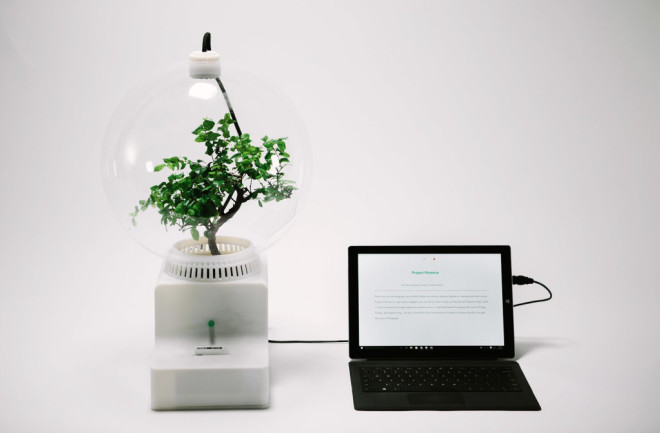 (Credit: Project Florence) Some gardeners swear by the practice of talking to their plants, and it's plausible that there's something to this old adage — there've been studies, but nothing conclusive. But for those clinging to an old green-thumb legend, technology is on your side. A new project from Helene Steiner, an artist-in-residence at Microsoft's Studio 99 program, hijacks the electrical impulses and chemical signals from plants in a creative way. Called Project Florence, her system allows a person to type in a simple message which is then translated into flashes of light that plants are responsive to — positive messages, for example, are blinks of red, a shade of light that promotes flowering. The system, in turn, translates chemicals emitted from leaves and electrical signals from the roots into basic human sentiments like "all well and good," or the rather confusing "next ... through the grapevine" (maybe it has some grape friends). It's a demonstration that's more fun than cutting-edge science, but engineers at Microsoft who are exploring novel ways for humans to interact with the environment took special interest in the project. “It’s brought together all sorts of folks from multiple fields and disciplines. It’s engineers sitting with biologists sitting with software [developers]. That kind of cross collaboration is essential for emerging technologies,” Microsoft Research’s principal research designer, Asta Roseway, told Digital Trends. https://vimeo.com/158255450

It was recently demonstrated that bees use tiny hairs on their bodies to interpret the electrical signals flowers are sending out to pollinators. Plant roots also shed waste products that are consumed by microbes in the soil, and these underground interactions leave behind spare electrons that can be tapped into to generate electricity. Plants also use a variety of chemical signals to communicate with animals, send distress signals or even fight back. When plants are injured or under attack, they release chemicals that call for help or warn other plants, and they emit a different suite of chemicals when they feel sunlight, or what we might call "feeling happy." Using Project Florence, a user can transmit messages via pulses of light to induce some of these chemical and electrical messages, and the length and color of the pulse is meant to communicate basic emotions. The system sniffs the chemicals the plant releases in response, and pairs the signals with snippets of tweets that express the same "emotions." In this way, it feels like having a simple conversation with a plant, although it's likely pretty one-sided — the plant is simply reacting to its environment. Still, the feedback can give insights into the plant's health, for example whether it is stressed out or enjoying some sun. While interpreting plant language through tweets may not be the best way to truly find out how a plant is doing, the basic concept of using plants' natural reactions to their environment to determine their health has a wide range of possible applications for both casual gardeners and dedicated farmers.