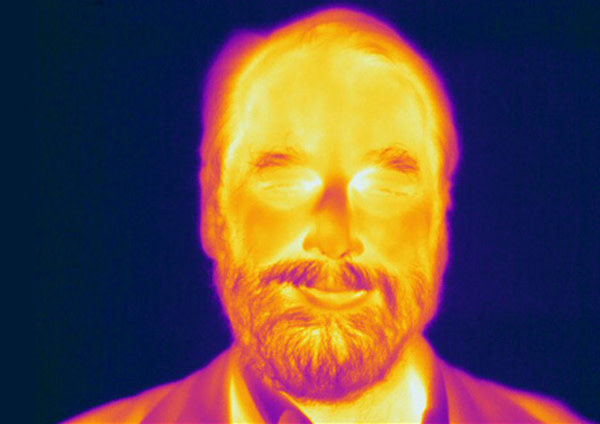 Contact lenses sharpen our blurry vision, and free us from the hassle of pushing sliding glasses back up our noses. But the future of contacts is nigh: Researchers have created a super-thin infrared sensor that could lead to the development of night vision contact lenses. Night vision, presently, is a rather clunky technology — epitomized in the rainy Tyrannosaurus rex scene in the original Jurassic Park

. To see in the dark, a person dons a set of binocular-shaped goggles strapped to the head. The devices also produce a lot of heat, so they need to be cooled, adding to the overall volume of mechanics required. Now, researchers from the University of Michigan are close to packing night vision’s clumsiness into technology that fits on your fingertip. They built a super-thin infrared light sensor using graphene — a material that’s a single carbon atom in thickness — that could be stacked on contact lenses or integrated into smart phone cameras for handy night vision.

If you look at graphite under a microscope, it’s comprised of thin layers of stacked carbon. If you separate these layers repeatedly until you reach a single layer, you’re left with super-conducting, strong, ultra-thin graphene. Scientists already know that graphene can absorb the entire infrared spectrum, as well as visible light and ultraviolet light. However, it’s been difficult to coax the material into absorbing enough light to produce an electrical signal. The team from Michigan engineered a new way to boost the sensitivity of graphene in order to generate an electric signal from infrared light. They did this by sandwiching an insulating barrier between two layers of graphene, and adding an electrical current to the bottom layer. When infrared light hit the top layer of graphene, it dislodged electrons as it normally would — but courtesy of the electric current, the pattern of electron movement was amplified and could be used to reconstruct the infrared image. The researchers published their findings in the journal Nature Nanotechnology

The new graphene sensor operates at room temperature without cooling mechanisms, which keeps its design very small. The prototype researchers have built is smaller than a pinky nail, and can be scaled down to an even smaller size. That small size means it could someday be affixed as an infrared sensor on, say, Google Glass, or on a contact lens. (Technology to display the image thus produced has been demonstrated

in contact lenses too.) “Our work pioneered a new way to detect light,” Zhaohui Zhong, assistant professor of electrical and computer engineering said in a news release. “We envision that people will be able to adopt this same mechanism in other material and device platforms.” Predator vision: no longer a far-fetched 1987 sci-fi film fantasy. Photo credit: NASA/JPL-Caltech