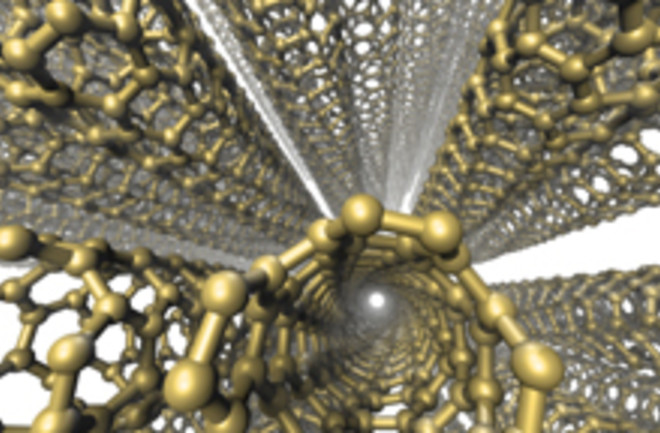 Carbon nanotubes have shown the potential to help us take better x-ray images, make cheaper hydrogen fuel cells, and replace silicon in computer chips. Add another possibility onto the pile: MIT researchers report this week in Nature Materials that they've used carbon nanotubes to create thermopower waves, a system they say could put out 100 times more energy than a lithium-ion battery. Michael Strano's team coated the tubes, which are only billionths of a meter across, with a fuel.

. That wave travels 10,000 times the typical speed of this chemical reaction, and the heat blasts electrons down the tubes. Voila, electric current. This previously unknown phenomenon opens up an entirely new area of energy research, Strano says, and the technology's potential applications are exciting.

Strano envisions thermopower waves that could enable ultra-small electronic devices, no larger than a grain of rice, perhaps a sensor or treatment device that could be injected into the body. Or they might be used in "environmental sensors that could be scattered like dust in the air," he says [Environmental News Service].

In Strano's experiments, the process actually created more electricity than their calculations predicted, probably because the system creates the phenomenon called electron entrainment.

The thermal wave, he explains, appears to be entraining the electrical charge carriers, either electrons or electron holes, just as an ocean wave can pick up and carry a collection of debris along the surface [Environmental News Service]

. That could make thermopower waves extremely useful in the future.

. Strano says it might also be possible to make the wave oscillate, producing the kind of alternating current used in so many modern technologies. For now, though, the team is focused on making the waves more efficient by reducing the amount of energy lost as heat and light. Related Content: DISCOVER: Future Tech: The Carbon Nanotube Grows Up 80beats: Carbon Nanotubes Could Replace Platinum And Lead to Affordable Hydrogen Cars 80beats: Nanotubes Could Provide the Key to Flexible Electronics 80beats: Unzip a Carbon Nanotube, Get a Nanoribbon, Revolutionize Electronics?Image: iStockphoto