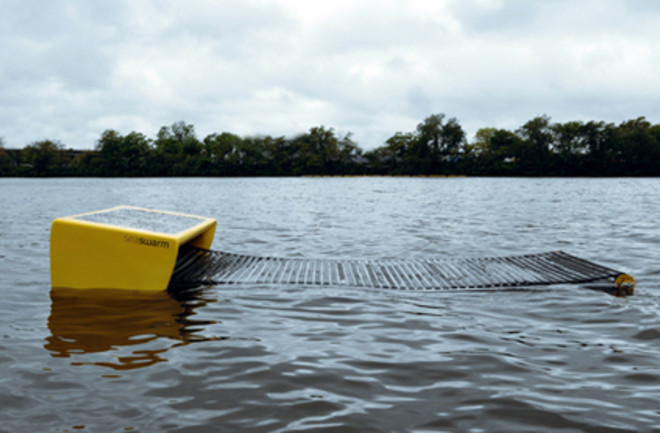 Earlier this week, DISCOVER brought you oil-cleaning bacteria. Today, we bring you oil-cleaning bots. This weekend in watery Venice, Italy, MIT scientists will demonstrate a creation called Seaswarm, a fleet of autonomous swimming bots intended to skim the water's surface; each bot would drag a sort of mesh net to collect the crude sitting there. According to their creators, the machines will be able to find oil on their own and talk to one another to compute the most efficient way to tidy it up.

The Seaswarm robots, which were developed by a team from MIT's Senseable City Lab, look like a treadmill conveyor belt that's been attached to an ice cooler. The conveyor belt piece of the system floats on the surface of the ocean. As it turns, the belt propels the robot forward and lifts oil off the water with the help of a nanomaterial that's engineered to attract oil and repel water [CNN].

The bots' belts can hold 20 times their own weight in oil, the MIT scientists say. And once the belts have collected to capacity, the machines can exact the oil back out it the head—that yellow part—where it can be burned off.

The Seaswarm robot, which is 16 feet long and seven feet wide, uses two square meters of solar panels for self-propulsion. With just 100 watts, the equivalent of one household light bulb, it could potentially clean continuously for weeks [MSNBC].

for the best way to clean up an oil spill, inspired by the disaster in the Gulf of Mexico

. The Seaswarm's creators say that a fleet of 5,000 bots like theirs could tackle a spill like BP's in about a month—at least what's on the surface, anyway. For massive wandering undersea plumes of oil

, thankfully we have those bacteria. Related Content: Not Exactly Rocket Science: Oil-Eating Bacteria Have Started to Clean the Deepwater Horizon Spill