Developers are marketing the devices to law enforcement and employers, but experts say they don’t actually prove impairment. 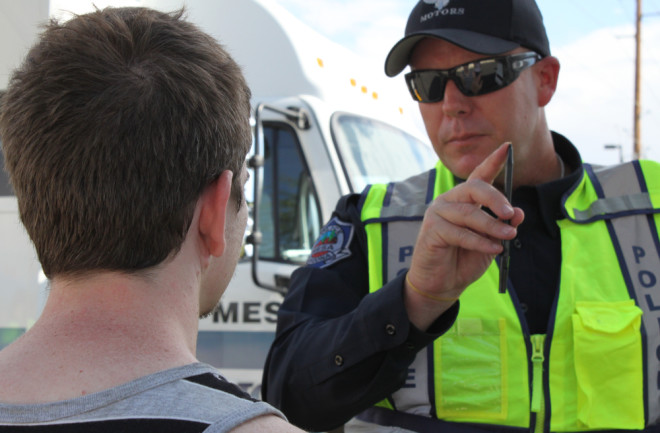 For a police officer, a day on the job doesn’t typically include flipping through Dope Magazine, taking a field trip to a marijuana dispensary or rubbing shoulders with a group of volunteer stoners. Chris Halsor, a Colorado attorney with two decades of criminal law experience, is changing that.

“Legalization of marijuana was a big paradigm shift for law enforcement,” says Halsor, who began teaching about cannabis in 2014. “When it was totally illegal, if you smelled it [or] saw a roach on the floorboard of a car, that instantly got you into cars without warrants. That instantly led to arrest.”

Nowadays, it’s not so simple.

Legalization of cannabis is sweeping across the country — but driving under its influence remains illegal. That means in the 36 states where residents are allowed to take a toke either medically or recreationally, law enforcement are laboring to determine just how impaired the person behind the wheel is.

Halsor’s educational “green labs” aim to help officers make improved arrest decisions by challenging their pre-existing biases about cannabis use. Perhaps unsurprisingly, experimentation with pot wasn’t a popular teenage pastime for many on the force. But Halsor says his “little guerilla research labs” have highlighted another problem: Although the National Highway Traffic Safety Administration claims cannabis affects driving-related skills such as reaction time and attention maintenance, the extent of impairment can be difficult to determine with standard field sobriety tests.

“You could absolutely have people under the influence of marijuana who had poor physical coordination,” he says. “And you could also have people who were completely baked out of their minds and could ace them.”

Soon, marijuana-related DUI’s may be easier for police to enforce.

Breathalyzer-like devices that measure the main psychoactive chemical in cannabis — delta-9-tetrahydrocannabinol, or THC — have popped up in various stages of development. Whereas urine tests detect the presence of marijuana up to a month after impairment subsides, and blood tests up to three weeks, breath tests have the shortest detection window of up to just two or three hours after smoking. It’s an important distinction for law enforcement, who could in theory use a positive result as evidence of driving under the influence.

The rollout comes at a pivotal moment for cannabis use, spurred in part by the COVID-19 pandemic. According to the UN World Drug Report 2021, stay-at-home orders and social distancing restrictions led to “cannabis users consuming cannabis more frequently and the exposure of a new segment of the population to the drug” in many countries. While marijuana markets enjoyed this business boom, however, the NHTSA reported that the number of injured drivers admitted to trauma centers with marijuana in their system rose by half in the beginning months of the pandemic, compared to the previous six months.

When it comes to alcohol, figuring out impairment is no tall task. Because humans are made of roughly 60 percent water, water-soluble alcohol disperses quickly throughout the body and is eradicated in a matter of hours. A simple ratio links the amount of alcohol in a person’s breath to the amount in their blood, and there’s a good chance you’ll find yourself taking a trip to the police station if you drive with a blood-alcohol content (BAC) above the legal limit.

For the first few hours after you light up or eat an edible, a breathalyzer can detect the THC that is transferred from the bloodstream and into the lungs — just like alcohol.

After that, however, THC is transformed into non-psychoactive molecules called metabolites. More than 80 different metabolites are formed from THC, all of which are stored in fat, and the length of time they linger in the body depends on a variety of factors: percentage of body fat, level of tolerance, gender, and the method and type of cannabis used.

California-based Hound Labs says existing tests that detect metabolites rather than THC can’t differentiate between the person who “smoked cannabis legally and responsibly at a BBQ on Friday night, versus their colleague who smoked Monday morning on the way to work.” Its Hound Marijuana Breathalyzer is one billion times more sensitive than an alcohol breathalyzer and is expected to ship to prospective customers at the end of this year, says CEO Mike Lynn.

The lab is in good company.

Cannabix Technologies of Vancouver is currently beta testing its THC Breath Analyzer with an occupational health care provider in California and with a clinic in the Northwestern US. And researchers at the University of Pittsburgh created a dual alcohol and marijuana breathalyzer prototype using machine learning algorithms and carbon nanotubes that bind with THC.

“A single carbon nanotube is 100,000 times smaller than a human hair,” said professor of chemistry Alexander Star at a webinar in June. “That’s why we can make very sensitive sensors using carbon nanotubes.”

State laws began specifying blood-alcohol content limits as far back as the mid-20th century. But it wasn’t until decades later, at the end of the 1990s and after heated debate, that all states adopted the 0.08 BAC limit. Despite the connection between alcohol intake and level of impairment being scientifically rock solid, that legal limit of intoxication continues to be debated even today, with some arguing for a new standard of 0.05 BAC.

When it comes to cannabis, that debate could last even longer.

“I can understand how people like to quantify things,” says Peter Grinspoon, a physician at Massachusetts General Hospital and board member at the nonprofit Doctors for Cannabis Regulation. “And I can understand how useful it would be to have a simple machine, a thing like a breathalyzer, that would simply allow law enforcement to say, 'you're impaired, you're not impaired.' However, it just doesn't work that way.”

In states like Colorado, if a driver has more than 5 nanograms of THC per milliliter of blood, a court can deduce that they are impaired. There's just one problem: science doesn’t back that up. “Five nanograms is an arbitrary number,” says Halsor. “It's what I describe as a political number.”

In a 2013 study, researchers measured blood THC above the 5-nanogram level for days after heavy users stopped smoking. And in a 2014 study comparing frequent and occasional smokers, researchers were shocked to discover that they didn’t detect THC at all in two people who smoked cannabis cigarettes right before their eyes.

Grinspoon, who jokes about being a “second generation” cannabis expert thanks to his doctor father who called for the legalization of cannabis back in the 1970s, has been working on this issue his whole life. Now, decades later, he’s skeptical that there will ever exist a formula to link the amount of THC pumping through your veins with how high you feel.

So, if not on the roadside, where might THC breathalyzers find a home? Some marijuana advocates say the workplace.

“[They] could be useful in, say, a workplace environment where the employer has a rule there's no marijuana smoking on the job,” says Dale Gieringer, director of the nonprofit marijuana advocacy group California NORML.

In fact, the group is currently pursuing legislation that prohibits California employers from discrimination based on evidence of past cannabis use. Gieringer says requiring an employee to blow into a THC breathalyzer right before, say, flying an airplane or operating heavy machinery makes more sense — and is less invasive — than a traditional urine or blood test.

“But,” says Gieringer, “I'm not convinced that they're quite ready for prime time yet.”