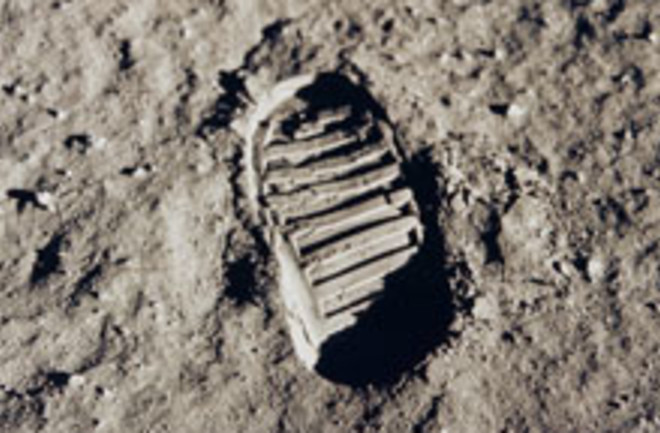 One of the teams competing for the $20 million top prize in the Google Lunar X Prize has announced its plans for an ambitious series of moon missions, beginning with a proposed trip to the historic Apollo 11 landing site. The team, Astrobotic Technology Inc., wants to send a rover to Tranquility Base in May 2010 to see how the relics left behind by Neil Armstrong and Buzz Aldrin have weathered over the 40 years.

The proposal has sparked a debate over whether new rovers can be trusted to not disturb the hallowed ground. Astrobotic Tech says its rover will land far from the Apollo 11 site and will be able to recognize and circumvent footprints and artifacts on the lunar surface, but not everyone shares this optimism. [Space policy expert] John Logsdon … believes the team should first perform trial runs on Earth. “I’d like to see them demonstrate their ability to do a precision landing someplace else before they try it next to the Apollo 11 site,” Logsdon says. “You wouldn’t have to be very far off to come down on top of the flag or something dramatic like that” [Seed].

The Tranquility Base mission is just the first of six proposed moon missions that Astrobotic wants to undertake over the next five years. The company, which is working with Carnegie Mellon University roboticist William “Red” Whittaker, believes that the $20 million X Prize isn’t enough to justify the expense of developing a rover that can be delivered to the moon, drive a third of a mile over the lunar surface, and broadcast its accomplishments in high-definition television. “It was very clear that it was going to cost more to win the prize than the prize itself,” David Gump, president of Astrobotic, said…. “So we really needed to provide a coherent strategy for a series of missions that could benefit investors and get them to come in and fund us up front” [SPACE.com].

To attract investors, Astrobotic says its subsequent rovers will collect a “lunar data library” of the moon’s geology and the effect of the lunar environment on spacecraft; access to that information could be licensed by companies or space agencies planning exploration or colonization efforts. Astrobotic says its second and third rovers would survey the south and north poles, which have been proposed as possible sites for a permanent lunar outpost. Then, in 2013, a rover could roll across the floor of the south pole’s Shackleton Crater to hunt for ice, with a “moon dozer” to follow later that year to test construction and regolith-moving techniques [SPACE.com].