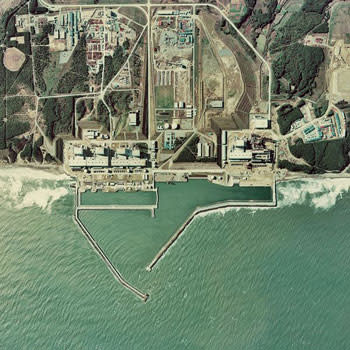 The Fukushima Daiichi power plant in 1975, seen from above.

As of this weekend, when Tomari Nuclear Power Plant was shutdown for maintenance, every last one of Japan's 54 nuclear plants have Japan has been taken offline

. Although the shutdowns are supposed to be temporary, after the power utilities' mismanagement of the Fukushima disaster last year

, the Japanese public has registered increasing distrust for official reassurances that nuclear power can be safe. These shutdowns could conceivably become permanent. The world's major economies all use nuclear power to some extent, and Japan, which got about 30% of its power from reactors, was one of the heavier users before the the Fukushima meltdown. Now, public opinion there and the world over has soured toward nuclear power, to the extent that Germany has officially announced plans to abandon nuclear completely by 2022

. As Bryan Walsh at TIME Science points out

, though, this backlash against one of the few high-output energy sources that does not involve fossil fuels comes with a price.

Japan's business community and its government have warned that the country could face serious energy shortages this summer without nuclear power, which could dent the world's third largest economy as it struggles to bounce back from the tsunami. Without nuclear power, Japan is projected to produce an additional 180 million to 210 million tons of carbon emissions this fiscal year compared with 1990, wiping out much of the improvements the country made over the past few years as it worked to meet its carbon-cutting commitments under the Kyoto Protocol.

The SciencesVictims’ Families Sue Japan for Failing to Warn of Eruption