The long-awaited technology could solve a lot of data storage problems, if it ever becomes a reality. 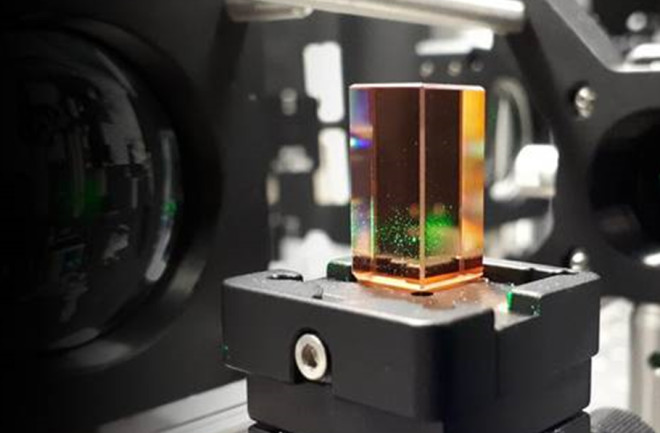 Every email you send, every selfie you take, every TikTok video you post adds to the amount of digital data in the world. And that pile of data is growing at an astonishing rate. According to recent estimates, by 2025, there will be in the neighborhood of 200 zettabytes of data zipping around in the world. To give you an idea of how much that is, one zettabyte contains a whopping 1,000,000,000,000,000,000,000 bytes, the basic unit in digital storage and processing. That’s a lot of information.

However, current methods of data storage aren’t keeping up with demand. Today, data is stored on either solid-state drives or spinning disk drives. Increasingly, however, it's being stored in the cloud, which refers to the software and services that can be accessed through the internet. And the storage capacity of these methods is no longer increasing exponentially as it once did. Ant Rowstron leads a team at Microsoft Research in Cambridge, UK, that is looking for future solutions for the cloud. New technology tends to start slowly, he explains. But eventually it hits a steady state of progress. “That's when you get these rules like, ‘Capacity doubles every two years’ or ‘Your compute power doubles every 18 months,’ and then as the technology gets old, it rolls over, and it gets much, much harder to get those gains,” he says.

Researchers are looking into glass and DNA for archival storage. But for “warm” data — data that needs to be updated frequently, such as emails or financial records — another solution is needed. For that, Rowstron and his colleagues at Microsoft Research Cambridge have teamed up with Microsoft Azure, Microsoft’s cloud computing service, to find the solution — and it just might be holographic storage.

Rather than record data on the surface of the medium (as in solid state or disk storage), holographic storage records data throughout the volume of the medium, using light — in this case, a laser — to record data in a tiny hologram inside a small cube-shaped crystal. Each block of data, called a “page,” can hold a hundred kilobytes of data, and by adjusting the angle of the laser beam, multiple pages can be recorded in one volume or zone of space.

To read the data pages, a pulse of light is diffracted off the hologram and captured by a camera, reconstructing the data page. Dramatic improvements in smart-phone technology have helped make this more feasible.

While holographic storage would certainly help with finding space for the increasing mountains of data, storage capacity is not the most important consideration, according to Benn Thomsen, senior principal researcher at Microsoft Research. The big issue is the speed with which you can access the data. To access data on a hard disk drive, the most common method of storage used today, he says, the disk has to spin around and position the data under the head that’s reading the data. That’s not a problem when you’re trying to access data on the disk in your home computer. However, in the cloud, you have many, many people trying to access data stored on the same disk. The disk has to spin around and back around to find what you’re looking for, what I’m looking for, what somebody else is looking for. This causes bottlenecks, Thomsen explains. With holographic storage, you don’t move the media, you route or steer the light to the place where the data is stored, which is much faster. Removing the need for mechanical movement of the storage medium, he says, is one of the biggest innovations of this technology.

Holographic storage could be more sustainable, as well. Because this storage medium has no moving parts, it potentially has a much longer lifespan. Getting rid of disks that have reached the end of their lifespans is a big deal, says Thomsen. “In order to ensure that we get rid of all the customer data, and no one can get access,” he says, “we literally have to put hard disk drives into a big crusher, then turn them into dust.” By contrast, with holographic storage, UV light completely erases the data, leaving the media ready to be used again and again, indefinitely.

Don’t expect holograms to fill up data centers anytime soon, though. The technology is still in the research stage, and, says Rowstron, “It’s a long way from research on a bench to an actual product.” But, he adds, “we’re optimistic.” Meanwhile, we’ll keep snapping pictures and writing emails to store in those holograms whenever they’re ready.