I'm Dreaming of an Eel-Illuminated Christmas 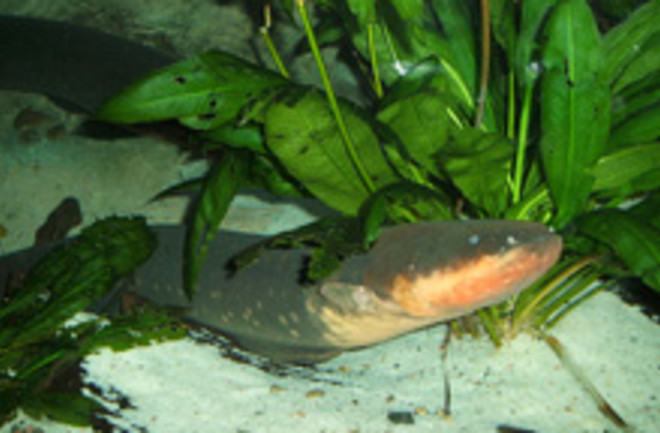 When an aquarium in Japan planned their holiday displays for Christmas, they decided to harness the natural talents of one resident: the electric eel. The lights on one small Christmas tree are powered by the eel's natural electricity, which is picked up by two aluminum panels in the tank that act as electrodes. The eel-powered Christmas tree has been a fixture at the aquarium for the past few years, but Reuters reports that this year the aquarium broadened its alternative energy experiment by adding a dancing Santa powered by stomping human feet. As we admire the tree, let's also take a moment to appreciate Kazuhiko Minawa, the inventor of this marvel and a spokesman for the Enoshima Aquarium. He says in the 2008 video below: "If we could gather all the electric eels from all around the world, we would be able to light up an unimaginably large Christmas tree." Oh Mr. Minawa, we can imagine it. Related Content: The Loom: When Love Shocks Not Exactly Rocket Science: Two fish families evolved electric powers by tweaking the same gene Science Not Fiction: How to Conduct the World’s First Electric Fish Orchestra Science Not Fiction: Electric Fish “Plug in” and Turn Their Zapping Into Music

More From Discover
Planet Earth
City Squirrels Might Be Getting Bolder — Or Maybe You're the One Who's Changed
Environment
Japan Just Had Its Earliest Peak Bloom of Cherry Blossoms in 1,200 Years. Is Climate Change to Blame?
The Sciences
Check Out Drone Footage of Kirishima's Largest Eruption Since 2011
The Sciences
Unexpected Eruption at Japan's Kusatsu Triggers Avalanche
The Sciences
Kirishima in Japan Erupts for the First Time Since 2011
Environment
Images from space reveal the beauty and potentially deadly nature of Typhoon Noru, Earth's strongest storm of 2017
Recommendations From Our Store
My Science ShopDiscover STEM Kits
My Science ShopDiscover 2022 Calendar
My Science ShopStrange Science
My Science ShopElements Flashcards
Shop Now
Stay Curious
Join
Our List