How to Repel Pirates? Blast Them With a Laser Cannon 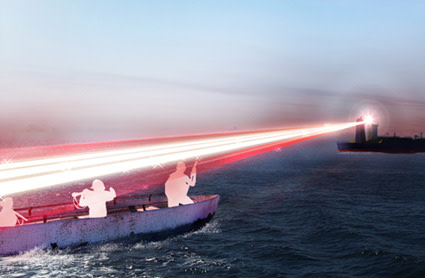 A shaft of green laser light spears out from a cargo ship, targeting a small skiff bobbing in the ocean almost a mile away. The armed miscreants aboard the skiff take one look at the dazzling light and shield their eyes with cries of distress. How can these pirates attack if they can't see? That's the idea behind an anti-pirate laser cannon being developed by a UK defense company in response to the increase in hijackings off the coast of Somalia. The laser would be used in conjunction with ships' high-frequency surface radars that detect the small vessels used by Somali pirates, and it would function as a kind of warning shot across their bow. New Scientist reports that the laser isn't intended to fry pirates to a crisp, nor even to blind them forever:

"This is very much a non-lethal weapon," says Bryan Hore of BAE Systems in Farnborough, UK, where the system was developed. By taking into account the range of the target, as well as the atmospheric conditions, the system can automatically regulate the intensity of the laser beam to ensure there is no lasting eye damage, he says.

That's important in cases of mistaken identity--it would be bad form to blind innocent fishermen or pleasure boaters. BAE Systems

says the laser system would work in daylight and at night, and says the effect of looking into the 3-foot-wide laser beam is akin to looking directly at the sun for a moment. According to The Telegraph

"We are using the laser as a kind of dummy sun that we can hide the vessel behind," said Roy Clarke, BAE Systems Advanced Technology Centre.

The laser offers a two-stage defense: It would first serve as a warning to pirates that the ship won't be taken by surprise. Should the pirates persevere, the power can be cranked up further to prevent the pirates from taking aim with their weapons--typically assault rifles and grenade launchers. The system has already been tested with optical sensors to determine its effectiveness across long distances. If international agencies approve it for commercial use, it could be available in a year or two. Related Content: Discoblog: Recycled-Plastic Boat to Sail the Pacific; Somali Pirates Unimpressed

80beats: Is the Anti-Whaling Activist Who Boarded a Japanese Whaling Ship a Pirate?