How Flexible Sensors Might Begin to Read the Body's Language 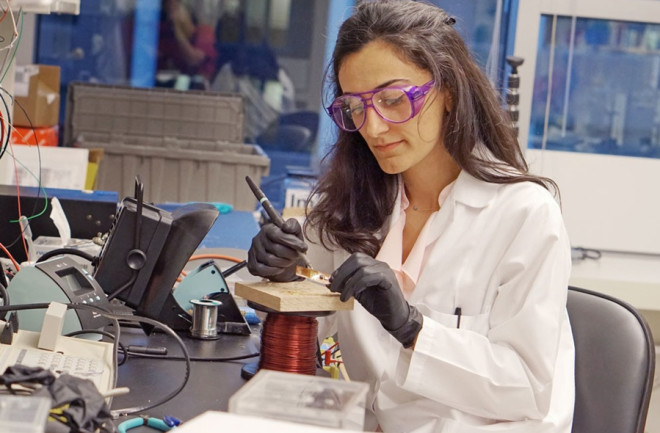 Can we improve medical devices by designing them to translate the language of the body? Materials scientist Canan Dagdeviren, who just launched a new research group at MIT, thinks so. Ever since she was a child growing up in Turkey, she’s turned tragedy and loss into research that speaks to hope.

Her inventions suggest that scientists can harvest electricity from the movements of our organs, pick up the first hints of disease from subtle changes in physiological patterns, or track changes wrought on the brain from neurodegenerative conditions.

When Canan (pronounced JAH-naan) was a child in the early 1990s, she learned that her grandfather had died of heart failure at just 28 years old. She promised to herself to do something, anything, to tackle the condition that struck her grandfather.

Decades later in early 2014, as part of her doctoral research at the University of Illinois at Urbana-Champaign, she and her collaborators unveiled a tiny biomedical gadget with big implications. Only a few centimeters on a side, the device looks like a sticker and converts energy from the natural movements of internal organs — the beating heart, the expanding or deflating lung, the rising diaphragm — into electricity. It’s not much, but it’s enough juice to power an implanted device like a pacemaker, which regulates irregular heartbeats.

“Today’s pacemakers need to be changed every seven years as batteries degrade,” she says. That means an operation. Dagdeviren’s device, which has been tested for safety on cows but hasn’t yet made it to the market, would generate enough power to run a pacemaker or other implanted device — no batteries required.

Dagdeviren’s energy harvester is built on a flexible foundation. The secret to its success is PZT, or lead zirconate titanate, which is piezoelectric. That means it generates a small electric charge as it flexes and relaxes. Affixed to the lungs, for example, the device changes shape — delivering a steady current — as a person breathes in and out.

Dagdeviren’s mother inspired another device. In 2012, her mom complained about how difficult it was to treat dry skin, and Dagdeviren immediately imagined how tech might help. As people age, their skin becomes thinner and less elastic; moisturizers restore some of that elasticity.

So Dagdeviren created a small, flexible and stretchable sensor that adheres like a sticker and bends with the skin as a person moves. PZT nanoribbons in the device generate small charges that measure skin elasticity, which indicates how well the skin is hydrated and how well a moisturizer is working. During the design process, she consulted with dermatologists, who suggested the device might also identify some skin cancers in their earliest stages. The patent is still pending on the device. A few companies have expressed interest in bringing it to market, and Dagdeviren says her group is looking for ways to apply the technology to other applications. And wherever it goes, it will always be rooted to her personal history, and her family.

A Spark of Curiosity

Dagdeviren grew up near the sea, so for a change of scenery, her family would trek into nearby forested hills for picnics. One of these outings sparked her interest in science when she was 7 years old, she says. Dagdeviren doesn’t mean “sparked” figuratively. She and her brother had just collected wood for the fire when their mother pointed out some white rocks with sharp edges, surrounded by flowers. Her mother struck two of those rocks together and produced sparks — showing her daughter the secret for making fire spill from stone.

“I loved the idea that you deform this material and create sparks,” says Dagdeviren, 32. “It was very exciting.”

That picnic experiment was akin to something she’d already been reading about. A few months earlier, her father gave her a biography of French scientist Marie Curie, two-time winner of the Nobel Prize and a pioneer in the study and understanding of radioactivity. Dagdeviren was inspired, but not in the way her father had expected. She became infatuated with Marie’s husband, Pierre, who Dagdeviren says was her “scientific love.” Pierre and his brother Jacques first described piezoelectricity in 1880. The Greek word piezein means “to squeeze or press,” and piezoelectric materials generate a charge when squeezed or deformed or smashed — like smashing two rocks together to produce a flash.

As an undergraduate at Hacettepe University in Ankara, still pondering how to make her own sparks fly, Dagdeviren majored in physics. Her father worried she wouldn’t find a job, that she’d be given a hard time as a woman in the field, but she was undaunted. Dagdeviren studied materials and physics, learned about the science behind all the sparks, and designed her first devices.

In 2008, at a materials science conference in Boston, Dagdeviren approached John Rogers, whom she describes as a “king of flexible devices.” At the time, Rogers was at the University of Illinois at Urbana-Champaign. His lab has produced a dizzying array of miniature biocompatible electronic devices that use soft materials, such as plastics and biological tissues. Many stick to the skin like temporary tattoos. Gadgetry out of Rogers’ lab has included everything from wireless electronic implants that fight a bacterial infection and then disappear, to stretchable batteries made of tiny nanowires arranged to resemble an accordion’s bellows.

Rogers is an alum of Bell Labs (now Nokia Bell Labs), which in its heyday was renowned for turning scientific research into engineering applications with a broad societal impact. Rogers says he runs his own lab on that model, encouraging students to focus on interdisciplinary scientific discovery and also to think about applications. Dagdeviren landed at Illinois in Rogers’ lab, and she fit right in.

Many graduate students in the lab, like Dagdeviren, are driven by personal experiences, says Rogers. “There’s something that really motivates people when they’re working on things that could benefit human health,” he says. “If those devices can save my grandma, then it’s not just a device that works — it has a real, and much deeper impact.”

In 2014, with her doctorate in hand, Dagdeviren joined the MIT laboratory of Robert Langer, whose work blends materials science with biotechnology. His group has designed novel approaches to drug delivery systems, as well as new ways to engineer tissue.

Dagdeviren designed a flexible and stretchable sensor that uses nanoribbons to generate small charges to measure skin’s elasticity. This can help monitor subtle changes in the skin.

“I like people to work on big ideas that I hope change the world, and I think they have already changed it,” he says. Dagdeviren brought her expertise to research on brain implants, launching collaborations with neuroscientists and other engineers. “She’s been incredible in doing that kind of [collaborative] work,” says Langer. “She’s great, brilliant, innovative.”

Dagdeviren’s most recent design was inspired by the death of a beloved aunt from a brain tumor. The new sensor, implanted in the brain, would continuously monitor neurological activity and carry out targeted drug delivery. If it survives extensive lab testing and gets to market, it could track the progression of Parkinson’s disease or monitor and treat a tumor.

The ideal medical device is comfortable, lightweight and practically invisible, says Dagdeviren. Her creations are stretchy, soft and robust. They’re flexible enough to laminate sensitive organs, but durable enough to work safely in such a complicated environment. They look nothing like the clunky, fragile, beeping, invasive technology we usually associate with lifesaving gadgetry.

Although she’s deeply entrenched in the complexities of nano-electronics, Dagdeviren sees her mission as translating the hidden codes encrypted in data collected from the body. The way to decipher those codes, she says, is through continuous monitoring. Most data measurements — heart rate, blood pressure, glucose levels — reveal only a momentary snapshot of a person and don’t capture how those variables fluctuate. Devices that remain attached to the body, outfitted with an unending power source, can observe a stream of data, which Dagdeviren says could make medicine truly personalized. Once scientists understand what a body says, they can figure out how to keep it running.

“I create devices that can listen to and interpret the body,” she says.

After her postdoctoral work with Langer, Dagdeviren was offered her own research group at MIT’s Media Lab. She spent last winter and earlier this year assembling a team of researchers, hiring lab managers and filing patents on the brain implant. (She also took a break last December to travel to Stockholm to accept a prestigious Science & SciLifeLab Prize for Young Scientists.) Dagdeviren has big plans for the brain implant, and she is developing ideas for piezoelectric-based devices that harvest energy from outside the body, such as from the motions of knees and elbows.

She calls them “human external dynamos” — one more example of translating the body’s language into improved health.

Stephen Ornes writes from a backyard shed in Nashville, Tenn.