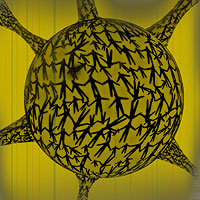 In 1988 the Japanese chemical company Showa Denko rolled out a new version of L-tryptophan, an essential amino acid sold over the counter in the United States as an aid to insomnia, premenstrual syndrome, and depression. To boost production, Showa Denko altered the manufacturing process and began using genetically engineered bacteria to create the product. Nearly two years passed before the Food and Drug Administration determined that the changes added trace amounts of a toxin that can produce a host of muscular and neurological problems grouped together under the name eosinophilia-myalgia syndrome. By the time the FDA pulled the poisoned L-tryptophan from shelves, more than 30 people had died from ingesting it, and more than 1,500 people were permanently disabled.

Although blame for the deaths lies primarily with Showa Denko’s technology, the tainted drug circulated as long as it did because of a failure by the FDA to spot an easily recognizable pattern. When an extremely rare disease erupts and all the sufferers have ingested a specific pill made by a specific company, a public-health specialist should be able to make the connection in a heartbeat. But it took months to establish the link because the relevant information was too dispersed for the pattern to be detected.

Where health care is concerned, pattern recognition can be a matter of life and death. That’s why the Mayo Clinic and IBM recently announced an ambitious multiyear partnership to apply IBM’s computational powers to the Mayo’s extensive patient database, creating an omnibus electronic file called the Mayo Clinical Life Sciences System.

Opinions are sharply divided about whether or not the recent rush by doctors and hospitals to digitize patient records is beneficial. Advocates argue that digital files are far more reliable—not to mention more legible—than hand-scrawled patient records stashed in manila folders. Detractors worry about maintaining privacy when health-care databases are stored on the Internet. One thing is clear: Patient care will never be the same. In coming years, interlinked databases of health records may radically change the interaction between doctor and patient as well as the way researchers study diseases and seek cures.

The Mayo-IBM collaboration is not so much about digitizing records as it is about establishing new ways to get a big-picture view across thousands or millions of records. Patient records have been stored digitally at Mayo for almost a decade; the clinic now has more than 4.4 million on file. “At any given moment I can look vertically at all the information on one patient, so I can get their surgical reports, their lab values, their X-ray scans,” says physician Nina Schwenk, who chairs the clinic’s information technology committee. “But one of the strengths of Mayo is the research we do looking across patients at how people with a certain condition respond to a specific treatment. And the way that the data in our records were structured did not make that horizontal analysis easy. We could do it, but it was more laborious and time consuming.”

Horizontal analysis searches for statistically relevant patterns in a vast database of information. Say, for example, that a researcher wants to look at patients suffering from both diabetes and leukemia who are being treated with the drug prednisone to determine the risks of secondary cancers. Fifteen years ago, such a study “would have involved going to our registration base, finding diagnoses of patients that match the profile, pulling hundreds of charts from our storage facility, having data analysts go through all the charts to make sure we’re getting everything we wanted, and then coming up with a final set for physicians to review to see how the patients do,” Schwenk says. “That would have taken months to do, if not a year. With our current computerized system, it would probably take months, but fewer months—maybe two or three. With the IBM database, we could do this in seconds or minutes.”

That acceleration is only a quantitative shift in processing time, but in practice it creates a qualitative change in research. If it’s going to take a year of painstaking archival work and analysis to get results, researchers must be confident that their queries are worthwhile. But if querying a Life Sciences database is as easy as using Google, a world of possibilities opens up: Researchers can follow hunches or toss in wild cards. The database becomes something they experiment with on the fly, and the penalty for wild-goose chases approaches zero. “This will generate new knowledge,” Schwenk says, “as opposed to being used to verify things that we’re already looking for.”

The collaboration is not merely about horizontal searches across patient records; it’s also about integrating the next generation of gene and protein tests into the Mayo database. Mayo enlisted help because genomic information is vastly more complicated than the standard items contained in traditional patient records. “There’s a lot of interpreting of the data that needs to be done,” Schwenk explains. “There are thousands of points of information coming out of each of the tests—and that information needs to be analyzed and understood. It’s not like ‘Your blood sugar level is 92 or 105.’ ”

The computational problems involved in interpreting genomic tests are several orders of magnitude more challenging that those posed by scanning a database of 4.4 million traditional records, says John Lutz, IBM’s vice president of on-demand business. “Some of these new tests contain more information than all the financial records that have ever been created about you since you were born.” Imagine a stack of 40 years’ worth of credit reports, bank statements, and mortgage documents, which is roughly how much information is stored in a single test. Now imagine examining a million of those tests, looking for interesting correlations. Other areas of collaboration between Mayo and IBM involve protein modeling, which will employ IBM’s Blue Gene supercomputer, now the fastest machine on the planet.

The ability to tap into a comprehensive genetic database opens up avenues for both research and treatment. That researcher looking into secondary cancers among leukemia and diabetes sufferers could instruct the Life Sciences System to analyze the genetic tests available for that subset of patients and search for any unusual gene sequences. The combination of genetic data and on-demand information promises to eliminate a great deal of the guesswork involved in treatment and prognosis.

“When I see someone with high blood pressure, I have a choice of 20 to 30 drugs that I can choose from,” says Schwenk. “There is some literature out there that will say, ‘If you’re diabetic, this drug is better than that one.’ But most of the time, the only way you can tell for sure is to start the patient on the drug. It’s almost trial and error to see how well it works for an individual and whether there are side effects. Not so far in the distant future we’ll know the various types of genetic difference that cause people to metabolize drugs in different ways. So I know that if you try drug X, it’s not going to work on you, and drug Y will have a heightened effect, while drug Z will have side effects. We’ll be able to know all that up front.”

The downside is that intimate details of an individual’s medical history could be exposed to prying eyes. If you convert an individual’s health-care information from a folder of handwritten documents stored in a file cabinet to a bundle of zeros and ones stored in an online database, a lot more people can gain access to that information, including prospective employers and insurance companies. Schwenk says researchers and physicians need special authorization to access the Mayo database and that great care is taken to shield the identity of specific patients during horizontal queries. But no database is entirely secure, and stories of abuse are likely to emerge.

The question for society is whether the risk of diminished privacy is worth the payoff of saved lives. Many of the people who died from the poisoned L-tryptophan might still be alive today had their entire medication history been stored in a system like the one being built by IBM and

Mayo. It’s possible, too, that health insurers or potential employers might have been able to access that data in inappropriate ways. But most of us, I suspect, would happily trade a small portion of our private life for a longer life expectancy.

In July Department of Health and Human Services secretary Tommy Thompson outlined plans to create a new national medical information network that would provide doctors and researchers speedy access to electronic health records. The objective is to digitize and link the patient records of most Americans within 10 years.

Discuss this article in the Discover Forum