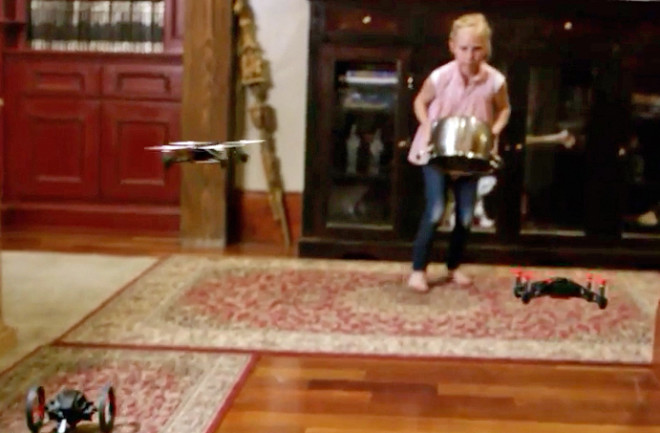 Sibling rivalries will never be the same, so long as there are drones in the household.

A video produced by YouTube’s Devin Super Tramp called “Drone Wars” is a fun take on the 21st century hijinks kids might get into while their parents are away. A young girl does everything she can to flee from a pack of buzzing, tiny drones controlled by three mischievous boys holed up in a bedroom.

The stars of the video are all various types of drones sold by French drone manufacturer Parrot, which was one of the first companies to release a line of purely recreational drones. Pay close attention, and you’ll see Parrot’s Jumping Sumo, the Rolling Spider, and the Bebop drone all make an appearance in this high-paced film. For an idea of how popular these drones — and drones in general — are getting, chew on this: In the first quarter of 2015, Parrot’s year-over-year sales jumped 356 percent.

The video itself looks like a seamless 2 minutes and 44 seconds of drama, but it took the team six nights to pull off. Each scene took about 30 minutes to shoot, according to a behind-the-scenes video. Many of the pilots in the film were flying drones for the first time.

But not to worry: No one was harmed (seriously) during the making of this video. And unlike the drone that sliced Enrique Iglesias’ hand, these tiny drones are far less of a threat to life and limb. Still, we feel obligated to remind sibling rivals not to try this at home.