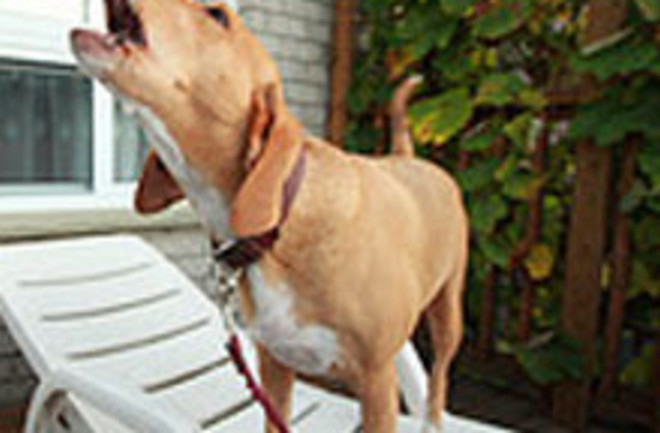 In the recent Pixar movie Up, a group of dogs wear collars that translates their barks into humans words. Such a device is no longer just the stuff of animation: One is about to be, er, unleashed by a Japanese company that claims its collar can give humans a glimpse into Fido's emotions. But although the device would certainly be useful—wouldn't it be helpful to know how your pup is feeling?—most experts are skeptical about whether the collar, called Bowlingual Voice, actually works. ABC reports:

The device includes a microphone worn around a dog's neck and a separate digital reader that — the company says — translates barks into one of six emotional states: happy, sad, frustrated, threatening, needy or assertive.... [The developers] provided "research and development and consulting as well as aiding speech, acoustics and radio waves" for the Bowlingual Voice's creation.... "It's a cute idea," said [organismic and evolutionary biologist] Kathryn Lord... "But it's hard to see the world or feel the world like [dogs] do. When we say a dog feels something, it's probably not exactly that."

A consensus of experts agrees that while many humans have long yearned for the ability to communicate with animals, the concept is a myth that is both "crude" and "simplistic." Still, that likely won't keep pet-lovers from trying... Related Content: Discoblog: Looking to Immortalize Your Pet? Now You Can Turn Muffy’s DNA Into a Diamond Discoblog: Weird Science Roundup: The Pet Survival Edition (Plus a Rap about Isotopes) Discoblog: Animal Fun Looks a Lot Like Human Fun: Games of Catch and Spa Visits