DNA sculpture and origami - a meeting of art and nanotechnology 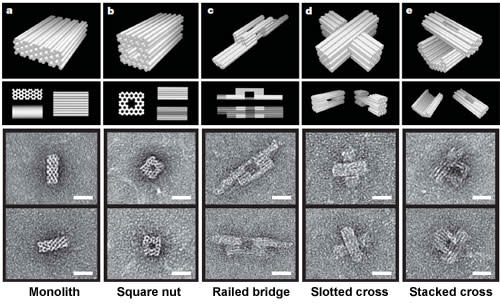 DNA is most famous as a store of genetic information, but Shawn Douglas from the Dana-Farber Cancer has found a way to turn this all-important molecule into the equivalent of sculptor's clay. Using a set of specially constructed DNA strands, his team has fashioned a series of miniscule sculptures, each just 20-40 nanometres in size. He has even sculpted works that assemble from smaller pieces, including a stunning icosahedron - a 20-sided three-dimensional cage, built from three merged parts.

Douglas's method has more in common with block-sculpting that a mere metaphor. Sculptors will often start with a single, crystalline block that they hack away to reveal the shape of an underlying figure. Douglas does the same, at least on a computer. His starting block is a series of parallel tubes, each one representing a single DNA helix, arranged in a honeycomb lattice. By using a programme to remove sections of the block, he arrives at his design of choice.

With the basic structure set down, Douglas begins shaping his molecular clay. He builds a scaffold out of a single, long strand of DNA. For historical purposes, he uses the genome of the M13 virus. This scaffold strand is 'threaded' through all the tubes in the design with crossovers at specific points to give the structure some solidity. The twists and turns of the scaffold are then fixed in place by hundreds of shorter 'staple' strands, which hold the structure in place and prevent the scaffold from unfolding.

The sequences of both the scaffold and staple strands are tweaked so that the collection of DNA molecules will stick together in just the right way. Once all the strands are created, they're baked together in one hotpot and slowly cooled over a week or so. During this time, the staples stick to predetermined parts of the scaffold and fold it into the right shape. The slow cooling process allows them to do this in the right way; faster drops in temperature produce more misshapen forms.

The result: a series of six structures that Douglas viewed under an electron microscope: a monolith, a square nut, a railed bridge, a slotted cross, a stacked cross and a genie bottle. These basic shapes illustrate the versatility of the nano-origami approach, and they can also be linked together to form larger structures. Using staples that bridge separate scaffolds, Douglas created a long chain of the stacked cross units. Most impressively of all, he made an icosahedron by fusing three distinct subunits. 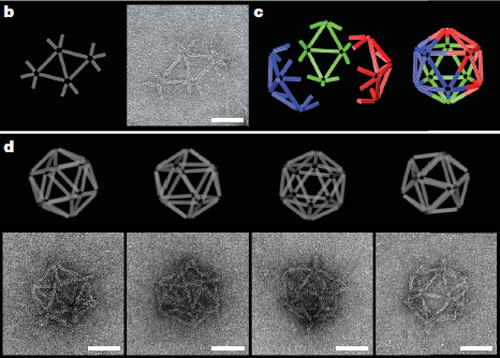 Douglas says, "[At first], this process was very time-consuming and error-prone even for trained DNA nanotechnologists." His team have since simplified things by building an open-sources programme called caDNAno that makes it easier to plan and design their sculptures. "With caDNAno, an individual with no prior knowledge of programming or DNA structure can complete a short tutorial and then be capable of generating sequences within a day for building a new shape comparable in complexity to the examples demonstrated here.".

The first DNA origami was folded by Paul Rothemund in 2006, who used a similar strategy of a single scaffold molecule that is folded into place by several smaller staples. Rothemund used the method to create a wonderful series of objects - smiley faces, world maps and more. But all of these creations were essentially two-dimensional sheets, consisting of a single layer of DNA helices.

Just this month, Ebbe Andersen took the field of DNA origami into three dimensions, by building a box out of six panels, all constructed using the same scaffold strand. The box even had a lid that could be opened or closed with DNA keys. But even this box, for all its innovation, only breached the third dimension by cleverly folding flat surfaces against one another. In contrast, Douglas's nano-sculptures are truly three-dimensional, right from the start.

The nano-origami could be viewed as art in its own right, but Douglas has bigger plans - he hopes that the technique will help nanotechnologists to produce working devices. To do that, it will have to overcome certain challenges, including the week-long construction times and the low yields of 7-44%. And while the technique could be theoretically used to produce any shape as long as it can be carved from a single lattice block, but it's unclear whether the technique would work for more complex or larger shapes. Nonetheless, it's a promising start and a most eye-pleasing one at that. 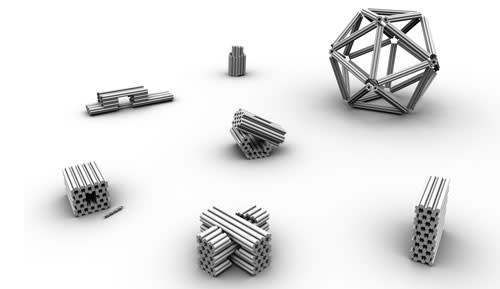