In the late 19^th century, asbestos became a building material of choice. Resistant to heat, electricity and corrosion, it found many uses including home insulation, brake pads and ship-building. By the time that the first health problems were reported, the material was commonplace. In the UK, the material was only restricted in 1983 after thousands of people were exposed during the post-war era. The result is a latent epidemic of related diseases including a rare type of cancer called mesothelioma, which is becoming more common and is only expected to peak in incidence over the next decade or so.

The glacial pace with which governments started to regulate asbestos use has put thousands of lives in jeopardy and it's a disaster that we could do with not repeating. But while asbestos is yesterday's construction material, a new substance being heralded as the building material of tomorrow has the potential to cause similar health risks - carbon nanotubes.

A new study suggests that carbon nanotubes can cause asbestos-like damage if they are injected into the bodies of mice. The results are cause for concern but not panic. The study didn't show that the nanotubes can build up in body cavities of their own accord, nor if this damage would eventually result in the mesotheliomas that asbestos can cause. It does however show that we are running before we can walk if the widespread commercial use of carbon nanotubes goes unregulated without rigorous research on their safety.

Carbon nanotubes are the poster child of the nanotechnology revolution. They are long cylinders made up of carbon atoms. Each tube is a single molecule and they can also be stacked one inside the other to form multi-walled cylinders with many layers. They can be several millimetres in length, but are usually only a few nanometres in diameter; tens of thousands could fit in the width of a single human hair

The nanotubes are among the strongest and stiffest materials on earth, and excel at conducting both heat and electricity. Their earliest use was probably to create really sharp swords. But in the 21^st century, their unique combination of desirable properties that has put them at the head of a billion-dollar manufacturing industry that is expected to grow substantially over the next few years. The hype around nanotechnology is growing just as quickly if not more so, but it has also been tempered by concerns over their safety. 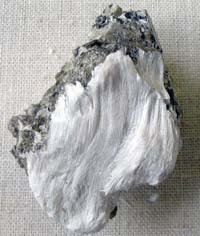 There is an assumption by some that since carbon nanotubes are simply rolled sheets of carbon atoms, they would pose no greater a threat to health than simple graphite does. But it is their structure, not their chemical composition, that is most concerning. Their small scale and needle-like shape is superficially similar to that of asbestos fibres.

It is these fibres that do the damage. If inhaled they can cause chronic inflammation in the lungs - asbestosis - as well as lung cancer. If the fibres travel out of the lung, they can accumulate in the surrounding cavity, the pleura, and trigger the development of tumours in the membrane that surrounds it, the mesothelium. The resulting cancer, mesothelioma, is almost entirely caused by asbestos fibres. The worry then, is that the consequences of taking an inadvertent whiff of carbon nanotubes would parallel those of inhaling asbestos.

Long and short of it

It's long asbestos fibres that cause the problems, by disproportionately inflaming the sensitive mesothelium. Short fibres have little effect. To see if carbon nanotubes behaved similarly, Craig Poland at the University of Edinburgh injected mice with four samples of carbon nanotubes, two short and two long, as well as both short and long asbestos fibres. The fibres were injected at low doses straight into their abdominal cavity.

After the injections, Poland washed out the cavity with a saline solution to study the molecules and cells within it. In mice injected with long fibres, be they asbestos or nanotubes, this washed-up liquid contained immune cells and proteins that indicated strong inflammation. 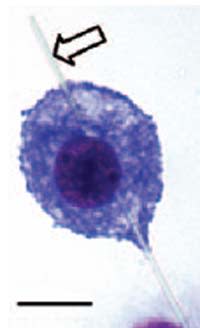 In these groups, Poland also found signs of granulomas, scar-like structures on the surface of the mesothelium made up of clumped immune cells. They form when white blood cells come across material they cannot digest like long carbon nanotubes that are wider than the cell's own diameter (see right). The frustrated cells then continuously release chemicals that trigger inflammation.

Poland describes his results as predictable but "unwelcome". They show that there is potential for long carbon nanotubes to cause asbestos-like damage in a living animal. But they are a long way from demonstrating an actual danger. Without the easy entry afforded by an injecting needle, carbon nanotubes could only pose similar risks to asbestos if they could become airborne, be easily inhaled and migrate from the lungs to the mesothelium in sufficient numbers. For the moment, we don't know if they can. Nor do we know if the damage observed in the mice would eventually lead to full-blown mesothelioma.

Poland believes that both questions need to be answered "with some urgency" if we are to avoid another disaster on the scale of asbestos. The answers may strongly could influence both the regulation and the manufacture of nanotechnology, especially since Poland also found that short carbon nanotubes don't mimic the effect of asbestos.