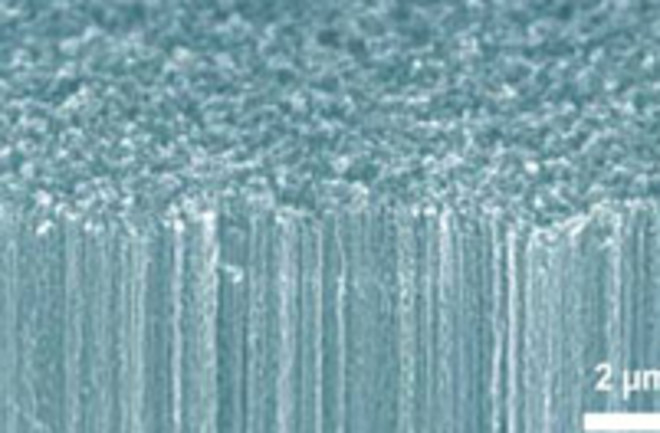 The joke about hydrogen-powered cars is that they're about 10 years away--and always will be. The technology has been held up largely by the high cost of hydrogen fuel cells, but now researchers say they've found a way to bring down the cost dramatically by making a key component out of carbon nanotubes instead of platinum.

More than half the cost of fuel-cell stacks comes from platinum, according to the Department of Energy. "Fuel cells haven't been commercialized for larger-scale applications because platinum is too expensive," says Liming Dai [Technology Review]

, the lead author of the new study. Researcher found that tightly packed, vertically aligned carbon nanotubes doped with nitrogen were more effective as catalysts than platinum, which is usually used to help oxygen react within the fuel cell.

That is a vital stage of the fuel cell cycle. Rather than burning fuel to create heat to power a turbine, fuel cells turn chemical energy directly into a flow of electricity. Hydrogen gas, for example, is pumped past one electrode (the anode), where it is split into its constituent electrons and protons. The electrons then flow out of the anode, providing electrical power, while the protons diffuse through the cell. Electrons and protons both end up at a second electrode (the cathode), where they combine with oxygen to form water [New Scientist].

That second reaction is very slow, so engineers have developed cathodes made out of materials that act as chemical catalysts and speed up the reaction. Until now, platinum was considered the best catalyst, but now carbon nanotubes with a trace of nitrogen (the critical ingredient) have left the precious metal in the dust. In their experiments, reported in Science [subscription required], researchers found that the nanotube setup produced four times more electric current than a fuel cell that used platinum. Dai also says that carbon nanotubes,

which are known to be electrically and mechanically robust, could overcome other issues that platinum faces. Carbon monoxide can stick to platinum's surface and make it less effective, Dai says. Also, platinum is not very durable, and its properties degrade over time. "Carbon nanotubes have long-term operational stability and do not suffer from carbon-monoxide poisoning," Dai says [Technology Review].

The lab tests were done with

a type of highly efficient fuel cells known as alkaline fuel cells. These cells have so far been limited to use for power generation on spacecraft, but the new advance could open the doors for their entry into the vehicle market [Technology Review].

Prototypes of hydrogen-powered cars have used polymer electrolyte membrane (PEM) fuel cells, but Dai says the nanotube catalyst would work for those as well. And while carbon nanotubes are currently expensive to make, Dai believes it will soon be commercially viable to use them in fuel cells.

"Since 1990 the cost of producing carbon nanotubes has fallen 100-fold and can be expected to fall further. Platinum on the other hand is a finite resource - there are limited reserves in nature" [Chemistry World]