Even With Public Funding, Hydrogen Cars Are at Least 15 Years Away 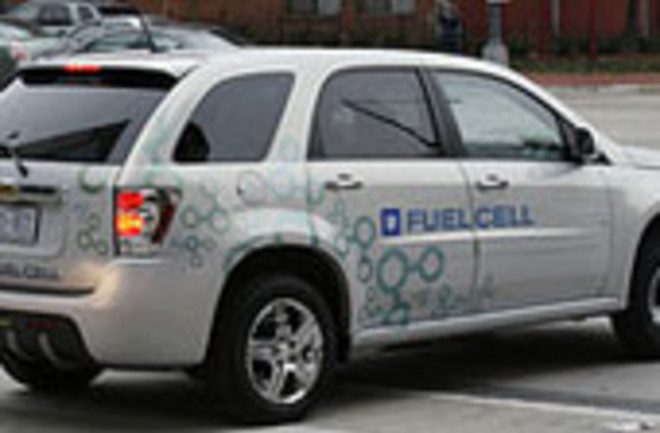 Cars powered by hydrogen fuel cells could be commercially viable in 15 years, according to a new report, but only if engineers overcome technological hurdles and the government pumps $55 billion into their development.

The primary barriers to adoption are high costs and the absence of an infrastructure to distribute hydrogen [CNET], according to the federally funded study.

Several car companies are already leasing their experimental fuel-cell cars, but the report says they won't be a mass-market hit until 2023 at the earliest.

Automakers don't disclose the costs of the few hundred fuel cell vehicles on the roads -- but generally say it costs $1 million to $2 million to produce one in such low volumes. The main expense is the platinum in the fuel stack, which accounts for 57 percent of the fuel stack cost [The Detroit News].

Hydrogen cars have been touted as an environmentally benign fix for America's car culture for years. The technology combines hydrogen with oxygen to produce electricity that powers the car, with drips of water the only byproduct; traditional vehicles emit greenhouse gases that contribute to global warming. Even President Bush has promoted hydrogen vehicles:

The new report acknowledges the long road ahead for hydrogen car development but doesn't suggest pulling back from the research; instead it recommends a "portfolio approach" of pursuing different transportation technologies, including fuel cells, biofuels, and fuel efficiency

But according to Paul Scott, an electric car advocate, the study really suggests that research should focus on plug-in electric cars, which are

"It's obviously ridiculous to put all the emphasis on a technology that's decades away when our needs are imminent," Scott said [Reuters].

For a little more perspective on the environmental impact of the first hydrogen cars, see the DISCOVER review, "Under the Hood of the First Real Fuel-Cell Car."