DARPA Wants a Biofuel Jet, While Germany Works on a Hydrogen Plane 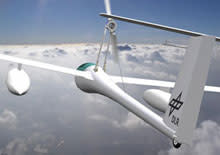 Look, up in the sky: It's a biofuel-powered jet! It's a hydrogen-powered plane! In fact, you can expect to see both of these alternative energy aircraft in the sky in coming years. The aviation industry is rushing to innovate as fuel prices continue to take their toll and as the public questions the impact air travel has on climate change. In North Dakota, an engineering team working with DARPA has created a soybean and canola oil biofuel for jets that they say is indistinguishable from conventional jet fuel, with a similar density and freezing point. The research team

is currently in the process of producing 25 gallons (95 liters) of the bio–jet fuel for ground testing in a jet engine as early as next month. "The thing that needs to happen is a purchase order to come through from the Air Force so we can get [the] investment to build that first plant," [engineer Chad] Wocken says. "We could get a plant operational in two to five years if there were a commitment to buy the fuel" [Scientific American].

Several airlines have taken a deep interest in biofuel research. Virgin Atlantic, the Dutch airline KLM, and Air New Zealand are all testing various recipes, although they've all discussed filling their fuel tanks with a blend of biofuel and conventional jet fuel. But a company called Solazyme recently announced that its biofuel meets strict aviation standards on its own; similarly, the new fuel that DARPA is testing out wouldn't need to be mixed with anything. Meanwhile, engineers in Germany are taking a different path. Earlier this week,

the German Aerospace Center (DLR) demonstrated the world’s first manned airplane that can fly exclusively with the use of a fuel cell. The fuel cell, which is based on polymer electrolyte membranes (PEM), generates power for the motor glider’s electric engine.... While the DLR’s demonstration is promising, its technology requires significantly more testing before it can be used commercially. And when PEM fuel cells are ready for aircraft use, they probably will only be used in small planes [CleanTechnica].

The German craft wasn't the first to stay aloft thanks to a hydrogen fuel cell. Last spring, Boeing took that honor when it sent up a two-seater that was partially powered by a fuel cell, but that craft relied on a lithium-ion battery for take off. Image: German Aerospace Center Related Posts: Super-Green, Algae-Derived Jet Fuel Passes Tests With Flying ColorsPoisonous Seeds Can Be Turned Into Jet Fuel