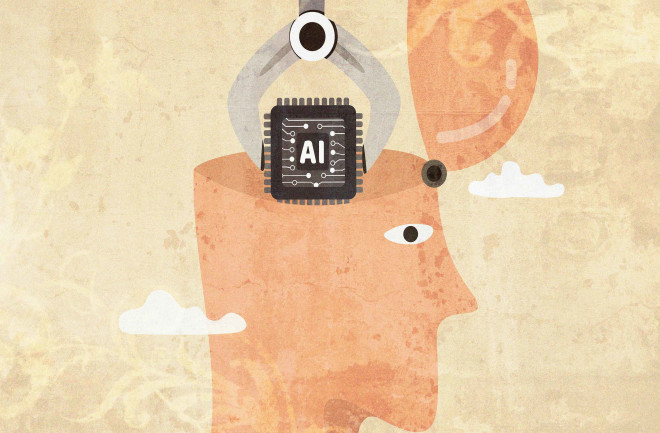 A major advancement in the field of brain-computer interface (BCI), announced in May, allowed a paralyzed man to imagine writing and have the words translated to text.

Researchers used an experimental device to tap into surgically implanted electrodes, capturing activity in the region of the brain responsible for physical movement. When the quadriplegic patient envisioned writing individual characters by hand, words flew across the screen. The text was highly accurate (95 percent) and arrived faster (90 characters per minute) than any other BCI, coming in at around the same speed performed by similarly aged people typing on their smartphones.

Led by Frank Willett, a research scientist with the Braingate research consortium, the new system doubles the speed of previous thought-to-text BCI tools, which had subjects look at a screen and mentally “point and click” — as if using a cursor — rather than simply imagining writing the letter.

Gernot Müller-Putz, the head of the Institute of Neural Engineering at Graz University of Technology in Austria, says that the current research is “really advancing the field.” Müller-Putz has researched BCI for decades, developing prosthetic tools for people with spinal cord injuries.

In the late 1960s, BCI research was first conducted on monkeys; human trials began in the early 2000s. The current research involves placing tiny electric arrays (a matrix of electrodes) directly into the motor cortex of the subject, which records neuron activity. Working with tech that previously controlled the movement of robotic arms (albeit slowly), researchers were able to use very quick, tiny movements, separated from each other, to create a spelling device.

A computer was programmed to recognize brain activity that corresponded with the alphabet. So when a subject imagines an A, the device knows exactly how to interpret those electrical signals in order to produce the correct letter on the screen. “They defined a new kind of writing,” Müller-Putz says. When the paralyzed person imagined and attempted writing each letter, specific, separate signals were also captured in the motor area.

The new device may be of great use to stroke victims who cannot move or speak, allowing them to message via email or other online platforms for personal and professional communication. It could help those with neurodegenerative diseases, as well.