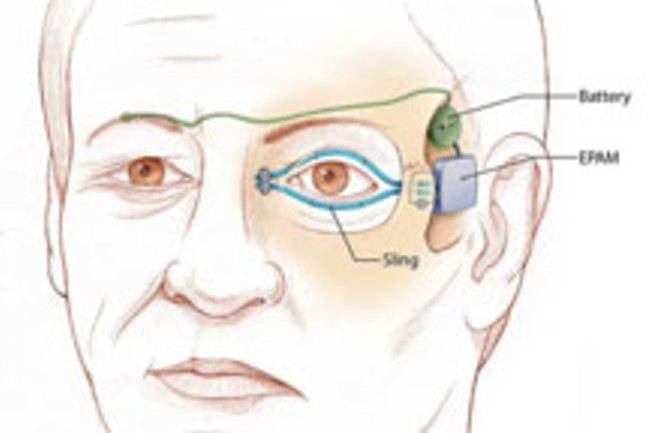 It's a disconcerting thought, but somewhere out there lies a cadaver... blinking. Beyond the fright, however, lies the hope for the suffering--scientists have found a way to make an eyelid blink using electrical charges. It's a big development that can help people with eyelid paralysis who face the possibility of going blind. Currently, eyelid paralysis is treated either by transferring a muscle from the leg into the face--a lengthy process that may not be suitable for elderly or sick patients--or suturing a gold weight inside the eye, which helps close the eye with the aid of gravity. But neither solution has many takers. Searching for an alternative, surgeons at the University of California at Davis experimented with artificial muscles with six donated human cadavers. LiveScience reports:

The artificial muscle they used acts like human muscle by expanding and contracting in response to electrical input. Developed by engineers at SRI International of Palo Alto, Calif., the muscle includes a piece of soft acrylic or silicone sandwiched between carbon particle electrode layers. When a current is applied, the outer layers get pressed together and squash the soft center, expanding the artificial muscle as a whole. When the charge is removed, it contracts.

Scientists say this is the first wave of artificial muscle being used in biological systems. In the future, the procedure may be used to treat patients with facial paralysis caused by stroke, injury, or combat. The findings were reported in the January-February issue of journal Archives of Facial Plastic Surgery. Researchers say the procedure might be available for patients with eyelid paralysis over the next five years. They are now conducting their studies on live gerbils. Phew! That's so much better than the thought of bagged, tagged, and blinking cadavers. Related Content: 80beats: Step Towards an AIDS Vaccine? Monkey Muscles Produce HIV-Fighting Proteins DISCOVER: New Treatment Lets Paralysed Rats Walk Without Using Their Brains DISCOVER: FDA Approves Drug That Promises Movie Star Eyelashes DISCOVER: Her American Face- Transplant Patient Shows Off Her New LookImage: University of California Regents