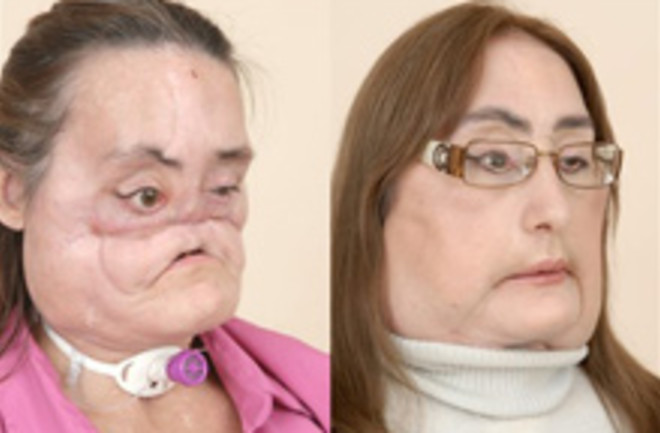 The first U.S. patient to receive a face transplant came forward yesterday to show off the results and to praise the doctors and the unnamed donor who made it possible. The 46-year-old Connie Culp underwent a 22-hour surgery in December to receive her new face.

Her expressions are still a bit wooden, but she can talk, smile, smell and taste her food again. Her speech is at times a little tough to understand. Her face is bloated and squarish. Her skin droops in big folds that doctors plan to pare away as her circulation improves and her nerves grow, animating her new muscles. But Culp had nothing but praise for those who made her new face possible [AP].

Culp was severely disfigured by a shotgun blast to the face that left only her upper eyelids, forehead, lower lip, and chin intact. News

reports prior to her surgery say she was shot by her husband in an apparent murder-suicide attempt in 2004. He also survived and is serving a seven-year prison sentence. In the years before the transplant, Ms. Culp had 30 different reconstructive surgeries, but none effectively restored the lost functionality [The Wall Street Journal].

She was unable to breathe unaided, eat solid food, smell, or smile. Then, on December 10,

Dr. Maria Siemionow led a team of doctors who replaced 80 percent of Culp's face with bone, muscles, nerves, skin and blood vessels from another woman who had just died. It was the fourth face transplant in the world, though the others were not as extensive [AP].

Culp will take immune-suppressing drugs for the rest of her life to prevent her immune system from rejecting the foreign tissue. But so far, she has experienced only one mild rejection episode, Culp's doctors say, and that was controlled with a single dose of steroid medication.

The operation reflects how doctors are advancing the frontiers of transplant surgery, devising increasingly complex procedures and using them to improve lives, not just to save them [The Wall Street Journal].

Some experts have raised ethical questions about face transplants, arguing that the "life-enhancing" benefits are not worth the risk of a transplant failure in which the body rejects the new face. But Culp's doctors stress that she regained many basic functions as a result of the surgery, and note that in January she was able to eat solid foods, including her beloved pizza and hamburgers, for the first time in years.

"The fact that there has been some recovery of function is important," said Eric Kodish, chairman of bioethics at the clinic. "This is not cosmetic surgery in any sense of the word" [The Wall Street Journal].