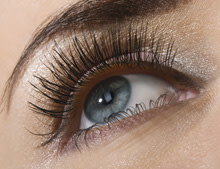 Naturally lush lashes can be yours within 16 weeks, claims the drug company Allergan, which has received approval from the Food and Drug Administration (FDA) for Latisse, the first ever eyelash-enhancing medication. According to the company, clinical trials show that daily dabs of Latisse on the edges of eyelids produce longer, thicker lashes, although mild side effects are possible. Allergan plans to start selling prescription-only Latisse by the end of March. The eyelash-enhancing ingredient in Latisse is bimatoprost,

a compound derived from fatty acids that bind to receptors in the eyelashes that may be involved in the development and re-growth of hair follicles. Allergan has used bimatoprost since 2001 in Lumigan, an Rx eye drop that lowers eye pressure in people with glaucoma [Scientific American]. Drugmakers stumbled upon the idea for Latisse when doctors and patients noticed lusher lashes on glaucoma patients taking Lumigan. Soon after, some doctors began writing Lumigan prescriptions for cosmetic patients, and competitors raced to create eyelash products that used bimatoprost or similar ingredients [The Wall Street Journal, subscription required].

Allergan, which also produces Botox, has since sued 11 companies for patent infringement for using bimatopost to promote lash growth.Although Latisse will be marketed specifically as a medication for eyelash hypotrichosis, or lack of eyelash growth, the demand for its cosmetic benefits is likely to be high. A 30-day supply of Latisse will cost $120, and Allergan predicts global annual sales to top $500 million. Latisse is to be applied once daily

to the base of the upper eyelash with a sterile, single-use-per-eye disposable applicator [Reuters].

The results won’t be immediately visible. It may take up to three months to develop thicker, longer and darker lashes. And once the treatments are stopped, eyelashes will return to their original state [The Boston Herald].

Side effects reported in clinical trials include eye redness, itchy eyes, and temporary darkening of the skin of the eyelid. Allergan says the treatment may also permanently darken the iris of the eye.

Latisse may also promote hair growth in other skin areas that it frequently touches, so Allergan recommends blotting it off any skin other than the upper eyelid's lash line to prevent that side effect [WebMD].

Latisse contains a lower dose of bimatoprost than that found in Lumigan and is not meant to be applied directly to the eye. Although the FDA has approved Latisse, it

also recommended further studies in certain groups of patients, such as young patients and people who lost their eyelashes to chemotherapy [WebMD].