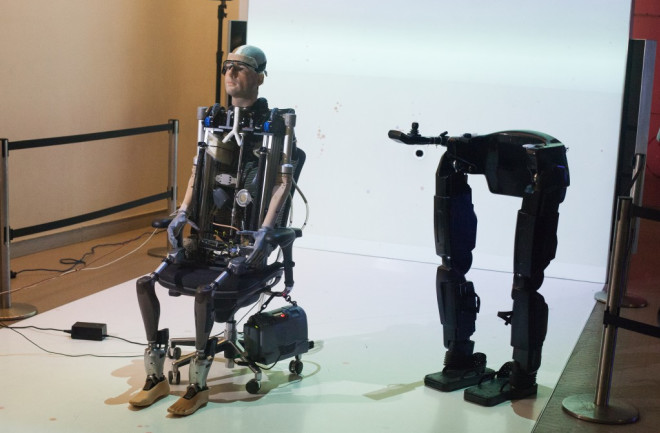 Here Rex is shown sitting down next to the apparatus he uses to stand. Image courtesy of Science Museum, London With working organs and a realistic face, the world's most high-tech humanoid made his debut in London yesterday and will be a one-man show at the city's London Science Museum starting tomorrow. The robot goes by Rex (short for robotic exoskeleton) or Million-Dollar Man (because that's how much it cost to build him). Rex looks somewhat lifelike in that he has prosthetic hands, feet and a face modeled after a real man. That man is Swiss social psychologist Bertolt Meyer, who himself has a prosthetic hand. Such technology is now becoming more widely available to the general public. But where Rex really breaks new ground is his suite of working organs. The team of roboticists, called Shadow, that created Rex incorporated various individual body parts built in labs all over the globe. He acts as a sort of showcase to demonstrate the human organs that are currently being built in the lab and what they can do.

Here Meyer looks into the eyes modeled after his own. His prosthetic hand is on Rex's chin. Image courtesy of Science Museum, London. Rex has a heart that beats with the help of a battery, and eyes that actually kind of see: Rex's glasses send images to a microchip is his retina, which in turn sends electrical pulses to the brain, forming shapes and patterns. But the roboticists didn't even try to tackle the complexity of the human brain this time. Rex's fist-sized dialysis unit works like a real kidney, and his mock spleen can filter infections from his "blood." This filtering function could eventually be extremely helpful in a human, but Rex's mock-circulatory system pumps a synthetic blood that is immune to infection. Rex's creators say he is the most complete bionic man to date. Altogether, scientists can now replicate a good portion of the human body's working parts, and research on much of the rest is already underway. Rex's roboticists and facial inspiration (Meyer) will appear with the bionic man in a documentary tomorrow on British television. The technology is impressive, and may one day help people who need new kidneys or infection-resistant blood. But Meyer says these advances also bring up some big questions about the ethics of building people and their parts. To see the bionic man in action, and learn more about the future of the technology, watch this video, courtesy of The Telegraph.