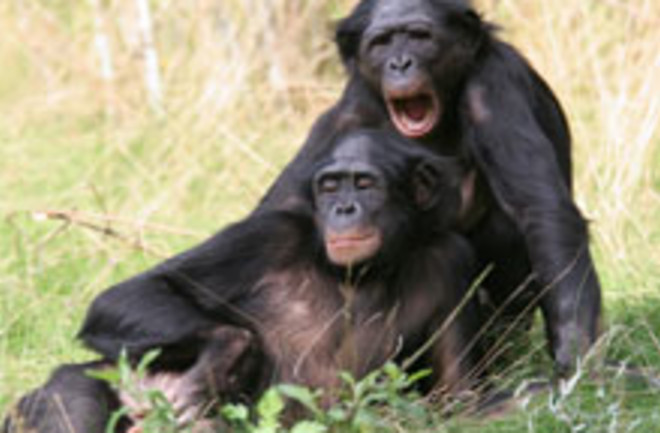 If you thought a zoo chimpanzee's life was a simple sequence of "see banana... peel... eat," then think again. The BBC is set to air a new documentary titled "The ChimpcamProject," that has been shot entirely by chimpanzees at Scotland's Edinburgh Zoo. We're guessing it won't quite match the high-tech joys of "Avatar," but the film is expected to provide fascinating clues as to how chimps view the world around them. The movie was primatologist Betsy Herrelko's idea. She introduced video technology to a group of 11 chimps living in a newly built enclosure at the Edinburgh Zoo. At first she just wanted to see if chimps could use a touchscreen to select different videos, thereby offering her a chance to study what images chimps liked. The BBC reports:

Initially, the chimps were more interested in each other than the video technology, as two male chimps within the study group vied to become the alpha male, disrupting the experiment. But over time, some of the chimps learned how to select different videos to watch.

Then, Herrelko wanted to gauge if chimps could record images with a chimp-proof camera--a camera enclosed in an orange bash-proof box. When the chimps were handed the "chimpcam" as a group, they carried it around the enclosure and were fascinated by the viewfinder. However, the BBC reported that the apes were not likely to have actively filmed any particular object or to have understood that they were making a film. But the researchers are confident the chimpcam will help garner new info on how chimps see the world. The film will premiere this Wednesday on the BBC, but here's a sneak peek at the list of chimps who made the end credits: Cindy, Ricky and Louis from Africa, Emma from Bedforshire, UK, and David, Kilimi, Kindia, Liberius, Lucy, Lyndsey, and Qafzeh who were all born at the Edinburgh Zoo. Related Content: 80beats: Chimps Don’t Run From Fire—They Dance With It 80beats: Chimps Catch Contagious Yawns From Cartoons 80beats: New HIV Strain Came to Humans from Gorillas, Not Chimps DISCOVER: Chimps Agree: A Bird in Hand Is Worth Two in the Bush DISCOVER: An Embarrassment of ChimpsImage Credit: iStock Photo