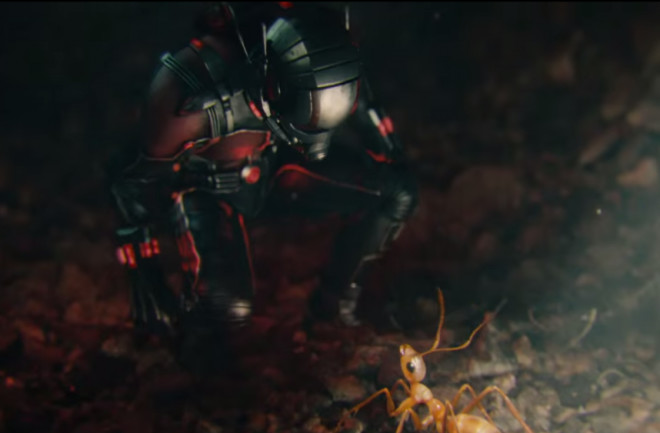 Credit: Disney | Marvel Entertainment When Paul Rudd's character puts on his superhero suit in the Marvel film "Ant-Man," he gains the ability to shrink to the size of an insect to infiltrate the tightest security systems. Despite his tiny stature, he can punch and throw around full-sized foes with human strength. He even commands ant swarms to do his bidding. The "Ant-Man" suit technology may represent a comic book fantasy, but many real-life military forces have attempted to harness the power of insects throughout human history. Military commanders have historically used insects to directly attack enemy soldiers, destroy crops and other food supplies, and as carriers of deadly infectious diseases, according to Jeff Lockwood, professor of natural sciences & humanities at the University of Wyoming. In his book “Six-Legged Soldiers: Using Insects as Weapons of War,” Lockwood points out many such uses of insects in both ancient and modern warfare. He also touches upon future possibilities for cyborg insects being directly controlled by human operators. In all those centuries of experimenting with insects as weapons, nobody has developed the technology to create a tiny, insect-size soldier with superhuman strength. Still, Lockwood said that "Ant-Man" does build its superhero fantasy upon some small grains of scientific truth. "The cool thing [about Ant-Man] is that there’s a hook that’s kind of correct; small things are stronger relative to size than big things," Lockwood said. "In a sense, I think that’s what makes the character work, because there’s this plausible grain."

The idea of Ant-Man having huge strength despite his small size takes inspiration from the real-life strength of ants. Conservative estimates suggest that ants can carry anywhere between 10 to 50 times their body weight. Individual body parts of ants might withstand much more pressure; a 2014 study by The Ohio State University researchers found that the neck joint of a common field ant could withstand forces between 3,400 and 5,000 times the ant's own body weight. The "Ant-Man" film takes that rather amazing fact and runs with it to suggest that the superhero can maintain his human strength even when he chooses to shrink in size. As one character describes it, the tiny Ant-Man can channel all the force of his human strength into the surface area of a bullet. The results appear to be almost superhuman strength. https://www.youtube.com/watch?v=pWdKf3MneyI Ants don't have any superhero powers to explain their relatively strong lifting capabilities. Instead, their strength comes from the fact that they have thicker muscles relative to their body size compared with humans and large animals. As a creature grows larger in size, the thickness or cross-section of its muscles (strength) can't increase as quickly as its muscle mass (weight), Lockwood explained. That means larger creatures such as humans have to use more of their muscle strength to support their own weight. By contrast, ants can use much more of their small strength to lift external objects. But that does not mean ants are objectively strong in a straight-up contest against human strength, as anyone who has squashed an ant should know. So for the sake of superheroes, we'll have to assume that "Ant-Man" somehow maintains his human strength whenever he shrinks in size. (For more on the science of Ant-Man's suit, see this Nerdist interview with Spiros Michalakis, a quantum physicist at Caltech who consulted on the physics of "Ant-Man.") Shrinking might also come with disadvantages for Ant-Man, Lockwood said. Small creatures have relatively large surface areas relative to their body volume, which means that they face the challenge of not losing all their body's water very quickly through breathing, skin surface evaporation and bodily waste. Insects have evolved to deal with that problem by sealing their bodies in waxy coatings and converting their nitrogenous waste into a dry form rather than urine. But Ant-Man might be dead of water loss within hours as a tiny human, unless his suit somehow protects him by preventing water loss, Lockwood said.

Historically, insects haven't needed super strength to be effective on battlefields. Bees, wasps and other stinging insects can inflict plenty of pain without requiring brute force. The ancient Romans supposedly used catapults to fling nests of such stinging insects at their enemies as "meat-seeking missiles." Warrior kings continued to use stinging insects as such weapons up through the Medieval period and even beyond. Insects have also been considered for the purpose of destroying enemy food supplies such as crops or livestock. During World War II, Nazi Germany developed a biological warfare program designed to attack England's potato crop with mass releases of Colorado potato beetles. In 1997, Cuba accused the United States of spreading a crop-eating insect called thrips palmi on Cuban potato plantations. The accusations stemmed from a "suspicious incident," but subsequent investigation turned up no "smoking gun," Lockwood said.

Credit: Department of Entomology, University of Minnesota The deadliest use of insects in war has involved their ability to spread infectious diseases. Many insects can act as animal hosts to harbor certain diseases, representing "pathogenic missiles with microbial warheads," according to Lockwood. One of the more infamous and devastating uses of such warfare came about during World War II through Unit 731, a biological and chemical warfare unit of the Imperial Japanese Army. Unit 731 eventually deployed plague-infected fleas and cholera-coated flies to Chinese cities during Japan's invasion of China. The Imperial Japanese military went so far as to develop a bomb that housed both flies and a slurry of cholera-causing bacteria. Warplanes dropped the cholera bombs and flea containers on Chinese cities and villages. The estimated Chinese death toll as a result of such biological warfare totaled about 400,000 lives, although some estimates put it even higher. (After the war, the U.S. military gave immunity from prosecution to a number of Japanese researchers who conducted Imperial Japan's biological warfare experiments in an effort to harness their knoweldge.) "If you co-opt insects, the pathogen is protected within the insect body, often amplified within the insect tissue, and you've got a missile that is often human-seeking," Lockwood said. "It's going to deliver the pathogen right to its target." During the Cold War, the U.S. military also funded its own research into insect-driven biological warfare at Fort Detrick in Maryland. The efforts went so far as to develop methods of mass production and warheads that could deliver disease-carrying insects, as well as several airdrop tests of such insects. North Korean and Chinese officials accused the U.S. of using insects to spread disease during the Korean War, but the historical evidence to back such claims has been lacking.

The real-life insects used in military history represented unwitting tools of humanity. But part of the thrill of watching "Ant-Man" comes from the fact that the superhero does not work alone. He enlists the aid of a swarm of highly obedient ants belonging to multiple species as his partners. The film explains this power by suggesting that Ant-Man wears an earpiece device that allows him to somehow communicate with ants using electromagnetic waves. Previously, the comic books described Ant-Man's helmet allowing the superhero to communicate telepathically with ants using psionic or electrical waves. There is some evidence that electromagnetic fields affect the orientation of some migrating insects such as monarch butterflies, Lockwood said. But ants primarily rely upon chemicals known as pheromones to talk with one another and lay out trails for others to follow. Ants can also use sound and touch to communicate. Still, Lockwood understands why Ant-Man's creators might have gone with the telepathic communication idea when the superhero first appeared in the 1960s. "Until people figured out how the use pheromones and chemical communication, [ants] would appear quite plausibly to be telepathic," Lockwood said.

Credit: Disney | Marvel Entertainment Human researchers have learned to control insects more directly in recent years by creating insect cyborgs. In 2006, the U.S. Defense Advanced Research Projects Agency (DARPA) put out a call for creating hybrid insects that could be controlled using "electronic remote control" or GPS. That led to a cyborg cockroach demonstration by a North Carolina State University lab in 2012. This year, researchers from the University of California Berkeley and Singapore’s Nanyang Technological University showed how they could remotely steer a flying cyborg beetle by stimulating its flight muscles. If such research continues, cyborg insects might potentially play a role on future battlefields. But Lockwood sees insects providing the biggest payoff as biomimicry design models for tiny robots that can crawl, swim or fly. "One of the primary values of insects is their tremendous diversity in terms of size and movement," Lockwood said. "Very small robots are probably going to be the most promising direction for future research rather than cyborg insects."