9 Ways to Store Energy on the Grid

Innovative energy storage is key to a future of renewable, but unpredictable, solar and wind power. 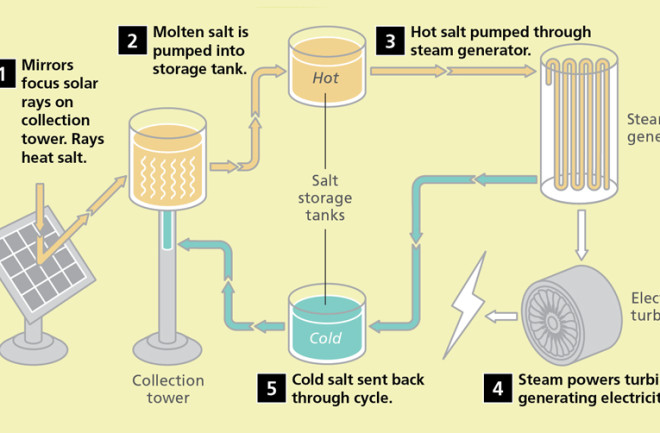 We take it for granted that electricity will flow to our light bulbs, computers and microwaves at exactly the moment we need it. We owe that reliability to the electric grid, a vast and complicated machine that constantly adjusts to balance the supply of electricity coming in from power plants, wind turbines and solar panels with the demand from customers.

To keep the grid humming, electricity has to be tucked away for times when demand exceeds supply. That’s especially true for renewable power — demand is sometimes greatest when the wind isn’t blowing or the sun isn’t shining. Right now, only about 2 percent of the electricity that can be generated can be stored on the grid. With more renewables coming online, more storage is needed, and soon. California has even mandated that 1,325 megawatts** of energy storage be added to the grid by 2020.

The race is on to find new and better ways to stash power. Scientists and entrepreneurs are already testing new technologies and improving old ones to expand capacity and bring down costs.

“There’s going to be a shakeout, as to which technologies are truly ready,” says Jeff Chamberlain, executive director of the Joint Center for Energy Storage Research based at Argonne National Laboratory. “It’s going to be a blood bath for the technologists.”

How it works: At times of low energy demand, motors powered by electricity or natural gas compress air and pump it into an underground cavern, abandoned mine or other large confined space. Later the air is released and heated. As it expands, it drives a turbine to make electricity.

Pros: Proven. Cities and mining operations have been using CAES for decades. It’s relatively cheap, and it involves no toxic materials.

Cons: Requires a cavern or other suitable space.

How it works: When demand is low, electricity is sent to a motor that accelerates a cylinder spinning in a case, which is vacuum-sealed to reduce friction. When electricity demand is high, the resulting kinetic energy is converted back to electricity.

How it works: Electricity is used to pump huge volumes of water from a lower reservoir to an upper one. When energy is needed, the water is released to flow through turbines, generating electricity. Ninety-five percent of stored energy currently on the grid is in pumped hydro.

Pros: Can store large amounts of energy — 10,000 MWh in a reservoir a kilometer in diameter and 25 meters deep. Storage installations last a half-century or more.

Cons: Requires space for a deep reservoir, and water to fill it. Low storage capacity despite the large volume of water involved.

How it works: Electric vehicles can double as batteries plugged into the grid, saving up power at night when electricity demand is low. Then they can send electricity back to the grid at peak times. An aggregator pools the power into one large source.

Pros: Can be used anywhere there is a parking spot and a plug. Owners can receive compensation for energy sent back to the grid under utility companies’ net metering policies.

Cons: Extra charging and discharging can wear out the battery sooner. Feeding the grid could drain the battery, requiring it to be recharged before driving.

How it works: Electric trains loaded with rocks or dirt travel up a slope when electricity demand is low. Then when electricity is needed, the rail cars slide back down the hill, and a regenerative braking system makes electricity as they go. The longer the slope, the better.

Pros: Can release large amounts of power quickly. Technology is proven, and plans are in the works for a 50-MW rail energy storage system in Nevada attached to California’s grid.

Cons: Lots of space and a hill are needed, and it works only in certain remote locations.

How it works: Batteries basically store and then release energy by sending ions through chemical compounds between negative (anode) and positive (cathode) terminals.

Pros: Proven. Solid batteries have been around for more than 200 years, but advances in the materials and chemistry of lithium ion and other batteries have made them much more efficient and effective. They can be used anywhere.

How it works: Flow batteries work in a similar way to typical solid batteries, but they can store exponentially greater amounts of energy since the chamber where the electrochemical reaction occurs is attached to large tanks that hold electrically charged liquid. The fluid in one tank has a positive charge, and the fluid in the other tank is negatively charged.

Pros: Large amounts of electricity can be released quickly.

Cons: Space is needed to store the large tanks of liquid. Risk of pollution from leaking and sometimes unreliable.

How it works: When demand is low, mirrors reflect sunlight onto tanks of molten salt, heating them almost to 1,000 F. When demand is high, the salt’s heat turns water into steam to drive a turbine, making electricity.

How it works: When demand is low, electricity is used to freeze or chill water that is stored in tanks on rooftops or inside buildings. Then at peak demand times, the ice or cold water is used to cool air for large office or industrial buildings, meaning they need much less power from the grid.

Pros: Simple thermal energy storage — hauling ice into the city to cool buildings — has been used for centuries. Thermal is among the cheapest types of energy storage.

Cons: Cooling buildings is only helpful in the summer.

[This article originally appeared in print as "Power Stash."]

Power is typically measured in megawatts, which refers to the rate of energy use, while energy is typically measured in megawatt hours, which refers to the amount used. (A MWh is one MW of power flowing for one hour.) So when the California Public Utilities Commission mandated that investor-owned utilities procure 1,325 megawatts of energy storage capacity rather than megawatt hours, many assumed officials had made a mistake.

But CPUC officials say they specified megawatts to give utilities more flexibility in meeting the directive and use storage for a variety of purposes.

"Having a mandate in terms of MWs allows different technologies to meet the goal," says Terrie Prosper, a spokeswoman for the CPUC. "If the mandate was ordered in MWh, it would have inadvertently constrained the types of storage applications that can be procured."