Zed the Mammoth Unearthed From Under an L.A. Department Store 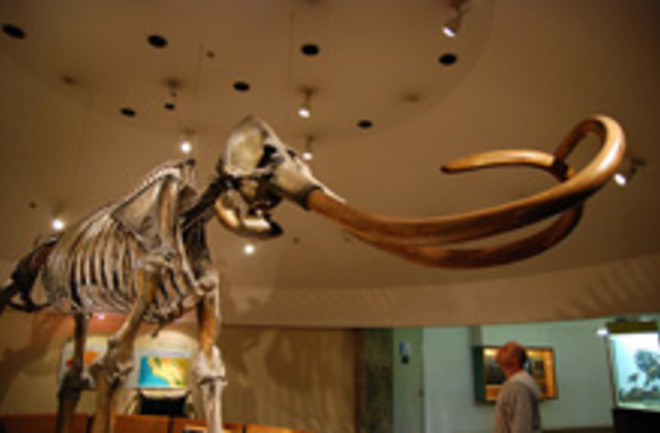 Excavators have unearthed the largest known cache of fossils from the last ice age. In it, a Colombian mammoth, which researchers have named Zed, has become the first nearly intact mammoth to be found near the La Brea tar pits, where an estimated 34 mammoths have been found previously, but only in bits and pieces. Zed was found in good company: among other finds were the skeletons of a complete saber-toothed cat, a giant ground sloth, and a North American lion, as well as smaller fossils including pieces of tree trunks, turtles, snails, and gophers. Even these smaller findings are exciting for paleontologists, because the first excavators at La Brea in the 1900s discarded such items as they searched for larger ones; crucial information was lost in the process. The new discovery, which was found at a site beneath the demolished May department store in Los Angeles, "gives us the opportunity to get a detailed picture of what life was like 10,000 to 40,000 years ago" in the Los Angeles Basin, said John Harris, chief curator at the [nearby George C. Page Museum]. The find will make the museum "the major library of life in the Pleistocene ice age" [Los Angeles Times].Missing only rear leg missing, a vertebra, and the top of his skull—which was shaved off by excavation equipment—Zed is believed to be about 80 percent intact. That includes his tusks, which is rare because unlike bones, the material they are made of, called dentin, is quite fragile. He is still being cleaned and most details have yet to be learned. All researchers know so far is that he stood about 10 feet tall at the hip and was 47 to 49 years old. Mammoths normally lived to about 60, so Zed died prematurely. Curators have found three broken ribs that were healed before his death. He probably got them from fighting with other male mammoths, "or he was just clumsy as hell," said Shelley M. Cox, who is supervising the cleaning [Los Angeles Times]. Though excavation is still in early stages, researchers expect to double what is already the world’s largest collection from this period. They are using a new technique to extract the fossils (with the exception of Zed, who was extracted using conventional methods): Instead of sifting through soil at the dig site, they have removed large chunks of earth and placed them, intact, in 23 wooden crates in a lot at the museum. Hence, the excavation has been informally named Project 23. Related Content: DISCOVER: 69. Frozen Baby Mammoth Unearthed 80beats: The Last Mammoths Made a Round Trip Across the Bering Land Bridge