It's that thing of where... 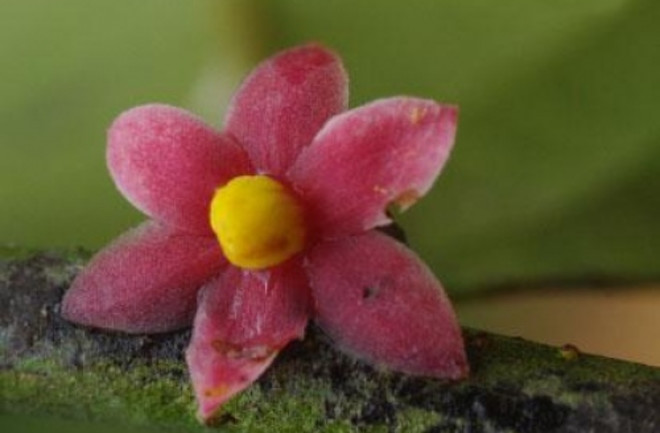 Gabon's hottest nightclub is Sirdavidia solannona. Located on the side of a mountain in this coastal African country, the genus of flowering plants has pulled out all stops. It's got everything: stamens, anthers, petals, stems, bees, three drunk porpoises trying to microwave leftover Chipotle, a human Slap Chop...

OK, OK, I can't keep that going, there's a reason I'm here and not on SNL. Some bits get away from you, what can I say!

Anyway, S. solannona is still pretty neat. David Attenborough got the whole genus named after him! There's only one species in it, but if anything, that's testament to how interesting it is.

The species (and genus) is a variety of thin tree with long leaves and striking red flowers found in Gabon. It was discovered just off the road in Monts de Cristal National Park, one of the best biologically-catalogued in the country, according to the researchers who found it.

Where other botanists have to tramp through miles of untracked jungle to find new ferns and whatnot, it sounds like these guys just stopped for a bathroom break and stumbled on a eureka moment. Some people have all the luck.

Even more interesting, the closest genus to S. solannona, Mwasumbia, also has but one species. Those plants are located just in a small part of Tanzania, though, almost 2,000 miles away. How the two got so far apart, and stayed that way, is a total mystery.

What's most fascinating to me though, and what got me thinking about nightclubs in the first place, is how S. solannona reproduces. Unlike most flowers, it doesn't just put its pollen out there for any passing insect to grab. No, if you want some honey, honey, you've gotta work for it.

S.solannona engages in what's called buzz pollination — the plant locks its pollen inside its anthers tightly enough that the fine grains won't just fall out as they would normally. Instead, visiting bees need to vibrate their bodies at a specific frequency — in effect, dance — so that the pollen wiggles itself free and onto their waiting bodies.

The plants are like the bee equivalent of nightclubs — they all head there to dance and hopefully get lucky. Only a few, obviously hip, species of bee can do this, meaning that buzz pollinator plants rely on them fairly heavily.

The tradeoff is that your pollen is definitely going to go to the right kind of insect. Quality over quantity. Anyway, S. solannona is the first plant in its entire order to have been observed pollinating in this way, making it literally one in several thousand.

In fact, the plant looks similar to a different family, Solanaceae, despite being pretty far removed from them on the plant family tree. That's convergent evolution for you, I guess.

Also, if you're wondering, the human Slap Chop is that thing of when a bunch of guys with ice skates jump up and down on a trampoline while people throw rotten vegetables at them. *Covers face with hands*