Your guide to zombie parasite journalism 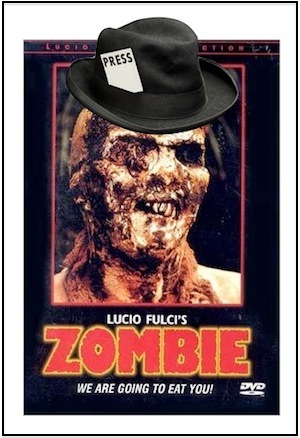 In the past few weeks, there's been a string of horrific tales of cannibalism and other zombie-esque behavior in the news. How to explain a handful of reports of people doing the unspeakable? One answer circulating around these days is that it must be parasites. And for some journalists, the question demands a call to the Centers for Disease Control to find out what they're hiding from us! 1. Andy Campbell of the Huffington Post asked the CDC if some kind of zombie virus was to blame for the recent attacks. On June 1, he reported on HuffPo's Politics page the following scoop: "CDC does not know of a virus or condition that would reanimate the dead (or one that would present zombie-like symptoms)," wrote agency spokesman David Daigle in an email to The Huffington Post. The Huffington Post entitled Campbell's hard-hitting investigation, "Zombie Apocalypse: CDC Denies Existence Of Zombies Despite Cannibal Incidents." That's perhaps the finest deployment of the word despite in the history of journalism. The story, by the way, received 65,797 likes on Facebook. 2. The Daily Caller picked up Campbell's expose later that day, essentially reposting his whole piece. But Daily Caller reporter Michael Bastasch also salted his cut-and-paste with a few pieces of his own research. For example, Bastasch reports, some people "have claimed it was caused by the LBQ-79 virus." The Daily Caller headline: "CDC: No zombies, despite cannibal attacks." Can't those pointy-headed government pencil-pushers see what's in front of their own dismembered noses??? 3. Andy Campbell must have bitten Michael Bastasch's ear, because the idea of parasite-induced zombification has infected the editorial offices of the Daily Caller. On June 4, a minute before midnight, Josh Peterson, Tech Editor at the Daily Caller, posted a new story: CDC silent on zombie-inducing parasites that live in human brains Clearly, this story could not wait for the morning, presumably because zombies prowl the night. Here's how last night's story starts:

The Centers for Disease Control and Prevention (CDC) recently denied knowing of “a virus or condition that would reanimate the dead (or one that would present zombie-like symptoms),” after a series of instances of cannibalism across the country were reported, but remains silent about the effect of zombie-inducing parasites that live in human brains.

The parasite is Toxoplasma gondii. Lifting material reported here at Discover, Peterson describes how Toxoplasma alters rat behavior, reducing their fear of cats, the final host for the parasite. About one in five humans carries Toxoplasma too, as do many mammals, including pigs. Now--watch as Peterson makes an Olympic-quality pivot off of the pig and back into the horde of zombies:

While pigs are known to engage in cannibalism, no known correlation between the parasite and cannibalism has been found.

France also has a high prevalence of Toxoplasma-infected people.

The Daily Caller’s inquiry to the CDC about why it omitted parasites from its denial, and about the possibility of the cannibals having been infected by the Toxoplasma, however, was met with silence.

Silence! Perhaps the CDC spokespeople simply couldn't pick up their phones, because they were busy holding their heads in their hands, wondering how their clever zombie attack survival guide

had gotten them into this mess, and how they're going to get out of it. As someone who has written a lot about the sinister powers of parasites

, I'd be right in the thick of it to report on any genuine information on a zombie-parasite outbreak--if there was one. But there isn't. While some people may laugh off these "reports" from the Daily Caller or the Huffington Post, others may take them--or subsequent rumors--seriously. So let me just lay out the reality of what parasites can do to the brain: 1. Some parasites do control the brains of their hosts. There are viruses

that drive their insect hosts to the tops of plants, so that the parasites can shower down on new hosts, for example. Some flatworms that infect fish cause them to thrash around at the surface of the water, to make them easier pickings for birds

, inside of which the flatworms can reproduce. Parasitic wasps rob cockroaches of their will

, so that the wasps can lay eggs on them, which then invade their docile host. Other parasitic wasps turn their hosts into bodyguards

. After they emerge from caterpillars, their dying hosts fight off other insects that would try to eat the pupating wasps. It's important to note that the most extreme examples of host manipulation come from tiny-brained animals such as insects or fish--not people. 2. A cannibalistic zombie is no benefit to a parasite. Host manipulation generally shows all the signs of natural selection at work. Mutations to genes in the parasites gradually give them the ability to alter the behavior of their host more and more, in ways that boost the odds that the parasite will be able to reproduce. But what possible good could come from a parasite that caused its host to kill other people? That just robs you (the parasite) of a potential host. Not smart. And so it should come as no surprise that scientists have never found a parasite that causes cannibalism. (Tasmanian devils spread cancer to each other by biting each other's faces

, but they don't need cancer's help to get into fights. The cancer cells just go along for the aggressive ride.) 3. Fine, but what about rabies? The rabies virus is pretty creepy, both in its manipulation of its host and in its deadliness. You get rabies from the saliva of an infected animal that bites you, and the virus then slips into the nervous system. Rabies infection makes animals aggressive--and thus more likely to bite new victims. The horror of rabies infection has haunted us for thousands of years (for more, check out the wonderful book, Rabies: A Cultural History of the World's Most Diabolical Virus

by Bill Wasik and Monica Murphy, coming out next month. Wasik, an editor at Wired, sent me the book a few months back, and I loved it.) But the reality is that rabies does not produce armies of human zombies trying to bite other people. It is possible to get infected by someone's saliva, but it's an extremely rare occurrence

. We humans are a dead end for the virus. It depends on other animals to continue circulating from host to host. And, again, let's think this through. Rabies is 100% deadly unless you get treated. But it stays in circulation because its hosts remain alive long enough to bite other animals before they die. Dismembering a victim and eating him for dinner, or chewing off his face under a Florida overpass are not going to do a virus much good.

4. But what about the LBQ-79 virus? I read about it on the Daily Caller! Couldn't that be a rabies-like virus that makes people cannibalistic zombies?

There is no such thing.

5. But there is such a thing as Toxoplasma, right?

Absolutely. Toxoplasma is one of my favorite parasites. And there's a lot of evidence now that it can influence human behavior--albeit in subtle ways. Kathleen McAuliffe lays out the current science nicely in this story

in the March issue of the Atlantic. But again, let's work through this. Toxoplasma only alters its animal hosts to make them easier prey for the parasite's final host. All effects on humans seem to be pale shadows of that strategy. (And, just like rabies, we are a dead end for Toxoplasma.) So how do we get from making your host easy prey to becoming a zombie cannibal? Also, bear in mind that the parasite dwells in the brains of over a billion people. It's been there for centuries, if not thousands of years. Only now is it suddenly turning people into cannibals? No self-respecting science-fiction scriptwriter would try pitching that idea to Hollywood. Unfortunately, the editors at the Daily Caller have lower standards than that. [Update: I originally wrote that Bastasch was the author of the second Daily Caller story. Fixed. Also, I accidentally block quoted some of my own text, giving the impression it was in the Daily Caller. Fixed.] [Second update, 5:10 pm: On Twitter, Peterson responded to this post by writing

, "Nice piece, but why'd you leave out the parts about it being related to mental disorders?" and, later asking

, "So you're content in not explaining the effect of the parasite on the brain in your piece, then?" Sigh. In case I wasn't clear enough by linking to McAuliffe's story, let me be clear now: a number of studies suggest that an exposure to Toxoplasma may influence people's personality. It has also been identified as a risk factor for schizophrenia. Here's one recent review

in Developmental Neurobiology that presents evidence of a raised risk in people who were exposed before birth. (Other studies have found that other infections can also raise the risk.) But I find Peterson baffling. Is he suggesting that we can explain an outbreak of cannibalism by pre-birth exposure to Toxoplasma, leading decades later to schizophrenia, leading to cannibalism? If so, it's not only ridiculous, but it's insulting to the 2 million people who suffer from schizophrenia in the United States, as well as their families.]