Respect For the Fungus Overlords

When I first learned about the fungus Cordyceps, I refused to believe. I was working on a book about the glories of parasites, so I was already in the parasitic tank, you could say. But when I read about how Cordyceps infects its insect hosts, I thought, this simply cannot be. The spores penetrate an insect's exoskeleton and then work their way into its body, where fungus then starts to grow. Meanwhile, the insect wanders up a plant and clamps down, whereupon Cordyceps grows a long stalk that sprouts of the dead host's body. It can then shower down spores on unfortunate insects below. I mean, really.

Yet this video from David Attenborough faithfully depicts the actual biology of this flesh-and-blood fungus. I also discovered that Cordyceps is not the only species that drives insect hosts upward. You don't even have to visit a remote jungle to see one. Here in the United States, houseflies sometimes end up stuck to screen doors thanks to a fungus called Entomophthora muscae

uses the same strategy to get into cows. Call me naive, but I assumed that creatures as freakish and wonderful as Cordyceps and company would attract enormous amounts of scientific attention. Yet I was frustrated to discover that hardly any research has been carried out on their powers of manipulation. That's a shame, because you cannot assume that these parasites are indeed manipulating their hosts. It's possible, but it's just a hypothesis that requires testing. One alternative explanation might be that when insects get infected with these parasites, they just lose their bearings. What looks like an adaptation to us--getting your host to a good place for spreading your offspring--may just be a coincidence. So it is with great delight that I see that David Hughes of the University of Exeter

and his colleagues are bringing some real science to bear on these X-Files creatures. Based on their research, these creatures have indeed evolved finely tuned adaptations for using their hosts. In fact, they're even more sophisticated that I had given them credit for. 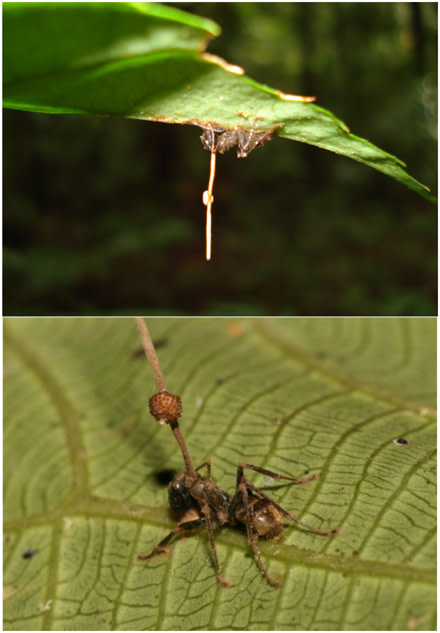 The scientists are studying a fungus in Thailand called Ophiocordyceps unilaterius. It doesn't infect just any insects, but only ants. And it doesn't infect just any ant, but almost always infects a single species, called Camponotus leonardi, a species that makes its nests high in trees and wanders around the forest floor for food. If Ophiocordyceps really has evolved to manipulate its host, then the scientists predicted that the manipulation would boost their reproductive success in a number of ways. The alternative explanation would be that,  as has been shown with other parasites,

they don't actually benefit from the change in their hosts. The scientists dissected infected ants to see how the parasites used up their bodies to grow. They also looked around the jungle to see where the ants ended up. It turns out that the ants don't end up randomly scattered across the jungle. Instead, Ophiocordyceps-infected hosts are concentrated in "ant graveyards." The scientists took careful measurements of the conditions in these graveyards, looking for any common factors they might share. They also plucked some infected ants from their leaves and moved them to different spots to see how their position affected their success in infecting other ants. The death grip of the ant is very precise. All ants bite the underside of a leaf (another species of Ophiocordyceps is known to make its hosts bite bark, and another bites twigs). The scientists found that 98% of the ants bit a leaf vein. Most of the ants ended up on leaves on the north-northwest side of the plant. The ants ended up on leaves low to the ground--at a height of about 25 centimeters. It just so happens that there are consistent differences in the air conditions at different heights in the jungle. The higher you go, the drier and warmer the air becomes. This is telling, because the rate at which fungi grow is very sensitive to humidity and temperature. Studies on fungi similar to Ophiocordyceps show that they need very humid conditions to grow well, and temperatures between 20 and 30 degrees C. When the ants ended up in this particular kind of spot, the fungus grew in the same consistent pattern. It developed an orange tube that ran the length of the animal, rich in carbohydrates. A big black ball of fungal tissue grew in the ant's abdomen, and white threads, known as hyphae, spread through the rest of the body. Within 24 hours after death, the hyphae began to emerge out of their host, making the ants fluffy. Some of the hyphae grew out to contact the leaf, lashing the host in place. By the second day, a pinkish stalk began pushing out of the ant's head. As the entire ant became covered in a mat of hyphae, the stalk grew to be twice as long as the ant itself. At first the fungus produces asexual spores, but after a week or so, the stalk produces sexual spores. Each night, both kinds of spores rain down on an area of about a square meter on the forest floor. When the scientists moved infected ants higher up into the canopy, the fungi grew abnormally and never fully developed. On the other hand, when the scientists moved the ants to the ground, the ants simply disappeared--devoured most likely by other animals or washed away by rain. The scientists published their findings

recently in the journal American Naturalist. There they conclude that the ant becomes what Richard Dawkins would call an extended phenotype

--an extension of the parasite itself, which helps it pass on its genes to the next generation. In a jungle, animals and plants evolve to exploit distinct niches. Ophiocordyceps exploits a niche of its own by directing its host to a place in the canopy where it can find the best conditions for growing quickly. (It should be pointed out that only infected ants end up on the underside of north-northwest leaves 25 centimeters up from the ground--it's not the sort of place a healthy Camponotus leonardi is found.) The resting place of the ants benefits the fungus not just because the humidity and temperature are good. It also helps the fungus extend the usefulness of the ant corpse. On the underside of a leaf, the ant's body is protected from sunlight and heavy rain. The fungus also protects its cadaverous house by making antibiotics to keep other microbes from invading and stealing the valuable food inside. Far from destroying the ant's body, the fungus uses its hyphae to strengthen the insect's exoskeleton into what the scientists call "a protective case." Inside the ant, the scientists propose, the fungus builds its orange tube in order to store up nutrients from the ant's fluids, so that it can fuel its own growth more reliably over the long term. These adaptations together may allow the fungus to produce a steady shower of spores for days on end in order to infect as many unlucky ants below as possible. Like their hosts, parasites face many threats to their survival these days. Just as overfishing may wipe out my dear namesake tapeworm

, I worry about the rampant deforestation of tropical forests, which may wipe out not just trees, but the insects that depend on them, and the fungi that depend on them in turn. We should not wish extinction on Ophiocordyceps, as gruesome as it may be. It has much to teach us. We might even borrow some of its tricks--Ophiocordyceps antibiotics show promising signs

of fighting against malaria and cancer. And it would be a true shame for this particular bit of science fiction to disappear from the world of science fact. [Image: PLOS One, via Creative Commons Licence]