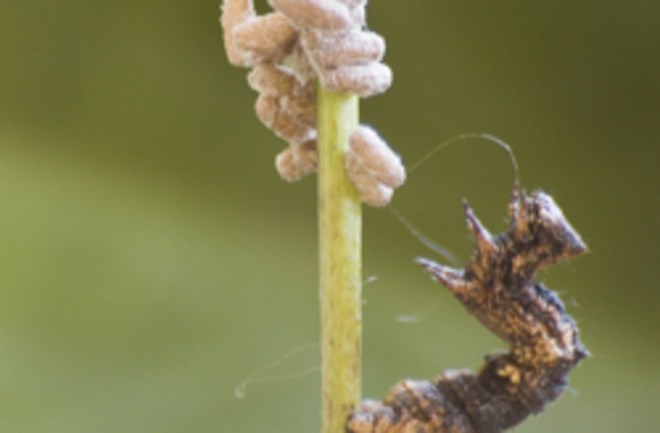 A caterpillar's life is not an easy one. The plants that it eats make toxins to make it sick. Birds swoop in to pluck it away and feed it to their chicks. But the most horrific threat comes from wasps that use caterpillars as hosts for their young. These parasitoid wasps are among my favorite creatures (see my post on the emerald cockroach wasp, which attacks cockroaches like a neurosurgeon). So it was with eye-popping delight that I read a new paper in PLOS One about how another species of wasp in Brazil attacks another caterpillar. Glyptapanteles glyptapanteles is more than just cruel to its host. It also gives its host an extreme case of Stockholm syndrome.

The fun begins when a female Glyptapanteles wasp comes across a potential host--a moth known as Thyrinteina leucocerae. The wasp inserts a stinger-like probe into the caterpillar's body cavity and injects dozens of eggs. The eggs hatch and grow into wasp larvae, which feed on the still-living host as it continues munching on leaves. The caterpillars even moult and pass through three or four stages with the parasites lurking inside them. Finally, when the wasps have finished their living feast, about 80 of them drill escape holes and crawl out of the caterpillar. They move a few inches away, where they spin cocoons on a twig or leaf, where they will develop into adults.

Many species of wasps exit their hosts this way, and in many cases the hosts promptly die. After you've just spent a couple weeks with dozens of parasites sucking your insides dry and then drilling their way out of your body, you'd probably feel like dying too. But in the case of Thyrinteina, death waits. The caterpillar stops feeding and crawling and simply sits, still alive, next to the wasp cocoons. When other insects come by, they wave their heads violently around, so violently they can knock the other insects off the tree. (You can download a movie of this behavior here.) Once the adult wasps emerge from the cocoons, the caterpillars finally expire.

You may be thinking that the caterpillars were turned into bodyguards for their parasites, protecting them from predators. And if it were ture, it would be a particularly striking addition to a long list of cases in which parasites manipulate their hosts for their own well being. I wrote about this manipulation at length in my book Parasite Rex, and have also written about it here on the Loom (suicidal rats, neurosurgical wasps, etc).

When scientists find a host acting weirdly, it's a reasonable hypothesis that they're being manipulated by their parasite. But it's just a hypothesis, one that cries out for testing. There are other possible interpretations, after all. W,hat looks like a clever adaptation that boosts the parasite's reproductive success may in fact just by an incidental byproduct of being sick. And a peculiar behavior that scientists observe in hosts they keep in a lab may not be terribly important out in the wild. Parasites sometimes need to go from one host to another to develop--in many cases, traveling from prey to the predators that eat them. If a parasite makes its host an easier target for predators, its host may get eaten by the wrong species of predator, one in which the parasite will die.

To test the bodyguard hypothesis on Glyptapanteles wasps, scientists ran experiments on the animals outdoors, on real guava trees. They observed how parasitized caterpillars behaved around the cocoons compared to healthy ones, and they observed how much protection the infected caterpillars really provided from predators by removing some of them.

So the bodyguard hypothesis looks good. But it naturally raises a question: how do the wasp larvae turn the caterpillars into their bodyguards? The catepillars only start fending off predators a couple hours after the wasps had left their bodies. It's possible that they left behind some chemicals that altered their hosts' behavior. But when the scientists dissected caterpillars three or four days after the wasps had left, they would find one or two living wasp larvae still inside. Scientists have found other parasites that have stayed behind in their hosts. Ants, for example, are infected by lancet flukes that drive them up to the tops of blades of grass, where they can be eaten by grazing livestock. It appears that they are driven by a few flukes that form cysts in the brains of the ants and can not pass on into their new host like the rest of the flukes. Perhaps the bodyguard caterpillars are being piloted by one or two wasps that stay behind, defending their siblings from predators while surrendering their own lives. Who knew such vicious parasites could be so heroic?

(Photograph by Prof. José Lino-Neto. Covered by a Creative Commons Attribution License. Any use should include citation of the authors and paper as the original source.)

[Note: Thanks for the fact-checking and copy-editing. I've fixed the text accordingly.]