Worst Science Article of the Week: The "Dark Side" of Darwin 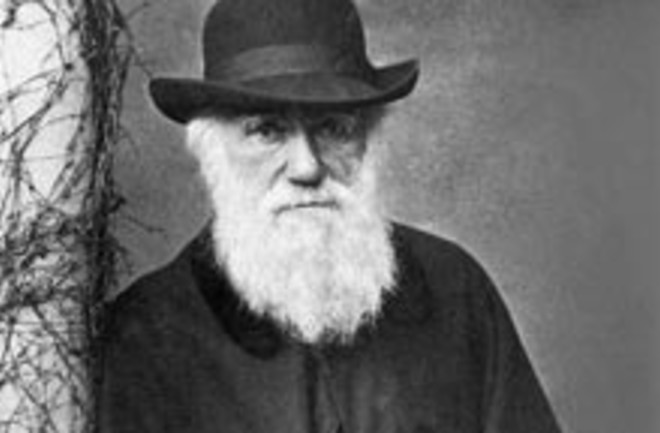 2009 represents a double-dip of Charles Darwin milestones. A plethora of Darwin stories in the press have marked his 200th birthday. And today, as 80beats has already noted, is the 150th anniversary of the publication of On the Origin of Species, an occasion that sparked another round of Darwin fever. TIME, however, observed the day by posting a Q&A with British author Dennis Sewell, who is selling a book on "how often — and how easily — Darwin's big idea has been harnessed for sinister political ends." Sewell isn't an evolution denier, but rather among the crowd crowing that Darwin was a racist and responsible for inspiring eugenics. Sigh. While it's probably true that Darwin was influenced by the racial attitudes of his time and place—Victorian England–DISCOVER has covered the other side of that coin: that the scientist was an abolitionist and rather progressive for his day. Even Ray Comfort, in his rambling, Darwin-bashing introduction to a "new edition" of Origin that creationists passed around college campuses recently, concedes: "However, after much research, I do concede that you won't find anything in Darwin's writings that would indicate that he in any way felt blacks were to be treated as inferior or that his views of them were due to their skin color." Even if the opposite were true, and Darwin the man was actually a howling racist, Darwin's theory of evolution would still smash the fallacy that different races belong to different species. Still, Sewell claims that eugenics is Darwin's fault because he supposedly believed that the poor were "genetically second-rate." School shootings, he asserts, are Darwin's fault because his theory means that human life has no more value than animal life and killers like the Columbine High School shooters latched onto this idea. But blaming Darwin for the fact that dictators twisted his ideas and teenage murderers used those twisted ideas to shoot their classmates a century and a half later is ridiculous at best. Sewell, asked about Darwin's status as a scientific luminary, concludes with this gem:

What has the theory of evolution done for the practical benefit of humanity? It's helped our understanding of ourselves, yet compared to, say, the discovery of penicillin or the invention of the World Wide Web, I wonder why Darwin occupies this position at the pinnacle of esteem. I can only imagine he has been put there by a vast public relations exercise.

Never mind that Sewell gives himself away as a conspiracy theorist with that last bit. Darwin wasn't perfect—DISCOVER noted one of his great scientific blunders

in the November issue. But, as writer Bruno Maddox says, in focusing on the man "we have detracted from the sheer, forehead-slapping obviousness of Darwinism the idea." TIME's Q&A is a good example of just that: While Sewell doesn't deny the truth of natural selection, his focus on Darwin the man allows him to make misleading statements about Darwin's ideas. And, as DISCOVER blogger Carl Zimmer

back in February, isn't not like the science of natural selection stopped in its tracks when Darwin published his most famous book. Researchers have spent the last 150 years refining Darwin's big idea and fixing its errors, unraveling the history of life itself in the process. Thanks to their work we know, for example, that the penicillin Sewell touts as the pinnacle of practicality is less effective

that it used to be because microorganisms evolve through natural selection. Anyway, if learning the true history of our species isn't "practical" enough for Sewell, well, tough. Buy an iPhone. Related Content: The Intersection: Ray Comfort's Anti-Darwinian Travesty

80beats: Darwin Goes Digital for 150th Anniversary of "On the Origin of Species"

DISCOVER: Darwin's Great Blunder—And Why It Was Good for the World