Darwin's Anti-Slavery Views May Have Guided His Theory of Evolution 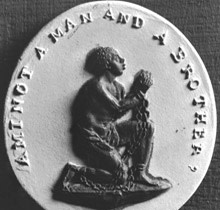 Charles Darwin's theory of evolution may have been shaped by his abhorrence of slavery as much as by his keen observations of Galapagos finches, a new book argues. Darwin's Sacred Cause, by Adrian Desmond and James Moore, notes that slavery propaganda of the time often claimed that different races belonged to different species, a notion that Darwin's work obliterated. The book

suggests that Darwin's unique approach to evolution - relating all races and species by "common descent" - could have been fostered by his anti-slavery beliefs [BBC News].

Published to coincide with Darwin's 200th birthday and the 150th anniversary of his publication of On the Origin of Species this year, the book is likely to stir up a new debate over Darwin's motives. Many members of Darwin's extended family were deeply devoted to the abolitionist cause, including his grandfather, Josiah Wedgwood, who founded a chinaware company and produced cameos distributed by anti-slavery campaigners; the medallions bore the legend "Am I Not a Man and a Brother?"

Darwin's mother and wife were Wedgwoods and anti-slavery was what Darwin called a “sacred cause”. He was taught to see the oppressed black as a “brother”. This explains why, when he went to Edinburgh University at 16, he could apprentice himself to a freed Guyanese slave to learn the art of bird preservation without thinking it [beneath his dignity] [Times Online].

Darwin later described that former slave as one of his intimate friends. During the voyage of the Beagle, Darwin saw scenes of slavery in South America that horrified him. He

saw the aftermath of slave revolts and the instruments of torture, and heard of a planter who threatened to sell the children of recalcitrant slaves. “It makes one's blood boil, yet heart tremble,” he wrote [Times Online].

Of course, that was also the voyage when Darwin tromped over the Galapagos Islands noting the differences between the beaks of finches and shells of tortoises that lived on different islands. After returning from his journey, he began working on his theory that all animals evolve from common ancestors through the process of natural selection. The authors of the new book say they aren't disputing that the scientific observations he made in the Galapagos were crucial to Darwin's thinking, but they argue that his political views must have shaped the way he saw the world, and allowed him to put the pieces together.

"There's got to be reasons why he came to common descent images of evolution when there was no precedent for that in the zoological science of his day," Desmond [said]. "It comes out of anti-slavery" [Reuters].