People with Williams syndrome are some of the friendliest people you’ll ever meet. They are incredibly sociable, almost unnervingly so, and they approach strangers with the openness that most people reserve for close friends. Their sociable streak is the result of a genetic disorder caused by the loss of around 26 genes. This missing chunk of chromosome leaves people with a distinctive elfin face, a risk of heart problems, and a characteristic lack of social fear. They don’t experience the same worries or concerns that most of us face when meeting new people. And now, Andreia Santos from the University of Heidelberg has suggested that they have an even more unique trait – they seem to lack racial bias. Typically, children start overtly gravitating towards their own ethnic groups from the tender age of three. Groups of people from all over the globe and all sorts of cultures show these biases. Even autistic children, who can have severe difficulties with social relationships, show signs of racial stereotypes. But Santos says that the Williams syndrome kids are the first group of humans devoid of such racial bias, although, as we'll see, not everyone agrees. Santos compared the behaviour of 20 white children with Williams syndrome, aged 7 to 16, and 20 typical white children of similar backgrounds and mental ages. To do so, she used a test called the Preschool Racial Attitude Measure (PRAM-II), which is designed to tease out traces of gender or racial biases in young children.

PRAM-II consists of a picture book where every page includes a pair of people of different genders or skin types. The researcher tells a selection of stories to accompany the images and the children have to point to the person whom they think the story is about. As they hear positive or negative adjectives, they reveal any underlying racial bias if they point to light-skinned or dark-skinned people, or men or women, more frequently. The typical children showed a strong tendency to view light-skinned people well and dark-skinned people poorly. Out of their responses, 83% were consistent with a pro-white bias. In contrast, the children with Williams syndrome only showed such responses 64% of the time, which wasn’t significantly different from chance. 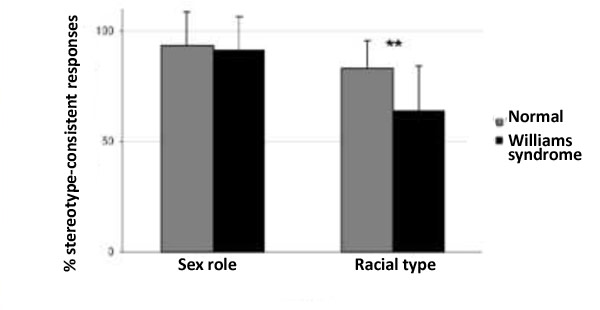 Santos suggests that children with Williams syndrome don’t develop the same biases that their peers do, because they don’t experience social fear. Andreas Meyer-Lindenberg, who led the study, says, “There are hyper-social, very empathetic, very friendly, and do not get danger signals.” And because they’ll freely interact with anyone, they are less likely to cultivate a preference for people of their own ethnic groups. Alternatively, it could be that because they don’t fall prey to stereotypes, they’re more likely to socialise with everyone. Santos is quick to rule out alternative explanations for this result. Some of the children with Williams syndrome were more intelligent or mentally advanced than the others, but they behaved in the same way. Nor could it be that they suffered from a general inability to assess people’s features, for both groups of children showed a bias towards their own gender. But not everyone is convinced. Aliya Saperstein from the University of Oregon praised the study’s “clever research design” and said that it shows the Williams Syndrome children are clearly less biased than normal ones. That is interesting in itself, but Saperstein is sceptical that they lack racial bias entirely. In the PRAM-II test, Santos claims that children without any biases should make pro-white responses half of the time, but she showed that the Williams syndrome children did so 64% of the time. This wasn’t significantly different from a chance result but the estimate was based on a very small sample size. Given larger numbers, those extra fourteen percentage points might indicate an important difference. Robert Livingston from Northwestern University agrees. He says, "I think that it’s problematic to make strong conclusions on the basis of null findings, particularly with a sample as small as 20 WS children." It’s also worth noting that the PRAM-II test doesn’t give children the option of a truly unbiased response. They can’t say that the story could fit either image equally – they can only give fewer pro-white answers. As Saperstein says, “The results don’t demonstrate or prove an absence of bias. And like all similar tests, the study may tap partly into one’s knowledge of social stereotypes not just one’s personal biases.” Livingston also notes that when we're talking about racial bias, there is a difference between stereotypes, which are based on our beliefs, and prejudices, which are based on our feelings and evaluations of other people. The Williams Syndrome children may not show prejudice, but Livingston says, "Very few if any people who do not show stereotypes." Regardless of whether the Williams Syndrome children lack racial bias altogether, it’s clear that they aren’t affected by it to the same extent as normal children. Santos’s results also suggest that racial and gender biases have different origins. The former is borne at least partly out of social fear while the latter has different roots. The link between social fear and racial stereotypes fits with the results of previous brain-scanning studies. In people with Williams syndrome, the amygdala, a part of the brain involved in processing emotional memories, is far less reactive to threatening social situations. The connections between the amygdala and the fusiform face area, which is specialised for recognising faces, are also unusually weak. The same areas might play a role in understanding information about people’s race: the fusiform face area tends to be more active when we look at people from the same ethnic group; and one study found that the amygdala is more active when both white and black people look at black faces. This will, of course, need to be tested in more experiments. Reference: Current Biology; citation unavailable at time of writing More on race: