Wildfire Engulfed Yellowstone 30 Years Ago. Its Recovery Could Predict The Future of the West 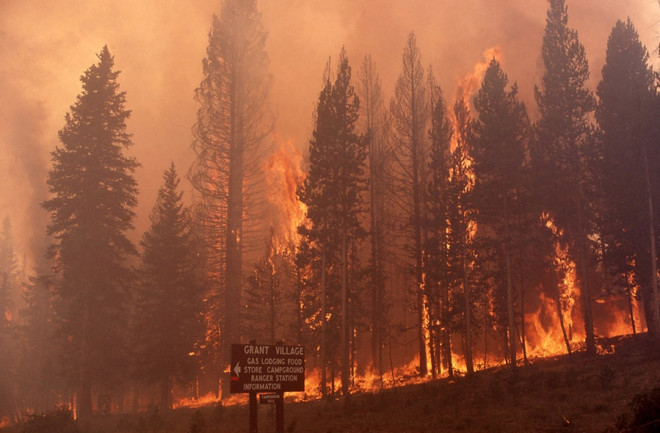 Wildfires that torched trees across Yellowstone National Park in 1988 left a mosaic of burned and unburned forests in their wake. The fires altered the park landscape for years to come. (Credit: Jeff Henry/National Park Service)

In 1988, ecologist Monica Turner found herself on the shores of Yellowstone Lake as the forest burned. She happened to be in the national park to collaborate with fellow ecologist Bill Romme to study historical fires with computer modeling. When the enormous new conflagration took off — coughing smoke into the air, into their eyes and lungs, and creating its own weather patterns — the researchers knew it would be significant. That fall, they returned to the park, and Turner got her first aerial view of the aftermath. She could see that the fire’s damage had not been contiguous, but rather a mosaic of burned and unburned areas. Turner has never looked away.

A total of just over 1,240 square miles would burn that year — more than a third of the park — and although news reports at the time marked Yellowstone as destroyed, that hasn’t been the case. In the 30 years since, Turner, now at the University of Wisconsin-Madison, has amassed a considerable amount of data and scores of papers.

What she and her colleagues have found was surprising at first. Many of the burned areas renewed from within through serotinous cones, which require heat to melt their resin coatings and release their seeds. Perennial grasses and wildflowers sprouted the first year after the fires and flowered profusely the second year. Aspen trees, which typically regenerate from asexual root suckering, began to regrow as seedlings — something researchers had never seen in that area before.

Romme, who is now retired from Colorado State University, and colleagues have reconstructed over 10,000 years of Yellowstone’s fire history and found that this monstrous fire was actually the kind that happens every 100 to 300 years as part of a natural cycle.

“The 1988 fires were not an ecological catastrophe, and I think the main thing that we learned from all of that research is just how resilient Yellowstone’s forests were,” Turner says.

Yet, as the planet warms, drought, high temperatures, prolonged heat and other conditions are lengthening the burning season and making severe fires more common, not only in the park but also around the world. How forests will cope is not clear. Turner thinks the research produced after the Yellowstone fires of 1988 can serve as a benchmark for how forests might respond to repeated burning, and the hot and furious future that may await them.

Climate change has been expanding the fire season. A 2016 paper by researchers from the University of Idaho and Columbia University found that rising temperatures have led to an additional 16,216 square miles of forest burning in the United States between 1984 and 2015 — forests that wouldn’t have burned otherwise. The same researchers found climate change led to nine more days of “high fire potential” each year from 2000 to 2015. These fires can burn forests that have been standing for some time or reburn forests recently incinerated.

Turner is concerned about the more frequent fires that consume areas previously charred, called repeated short-interval fires. While the 1988 fires burned old-growth trees, many between 100 and 250 years old, the ecosystem was adapted to such fires. Repeated short-interval fires, on the other hand, are destroying younger trees, some less than 20 years old. Different trees produce cones and seeds at different ages, so very young trees may burn before they can produce viable seeds. Some pine trees produce serotinous cones annually, but not until they start producing seeds. The lodgepole pine, for instance, begins producing viable seeds at 5 to 10 years old. These cones stay on the tree from year to year, increasing the tree’s seed supply, until a fire erupts. Areas reburned before the trees have had a chance to build up their seed supply may have a more difficult time recovering.

Nathan Gill trims weeds in a seed tray his team is using to study the germination and survival of lodgepole pine and Douglas fir seeds. His labmate Tyler Hoecker is studying how the seeds fare in recently burned areas, and predicts that hotter, drier spots will be worse for the seeds. (Credit: Kristen Pope)

Turner and her team are studying a handful of these reburned areas to understand how the increased frequency of fires may affect ecosystems.

On a hot, sunny day in late July, a group of Turner’s researchers gave me a tour of three of these sites — one burned in an unnamed fire that occurred around 1872, another site burned in the 1988 Huck Fire and a third burned in the 2000 Glade Fire. All three were reburned in the 2016 Berry Fire. Soon after we rendezvoused south of Yellowstone National Park, we were walking through a sea of blackened lodgepole pines. The standing charred trees, called snags, tower over a forest floor carpeted with lupine, fireweed, wild strawberries, pinegrass, sedges and other plants. Charred fallen trees litter the ground.

Postdoctoral researcher Nathan Gill points out a seed trap, one of nearly 600 he’s set up this summer to study how effectively wind-blown lodgepole pine cone seeds travel into burned areas. He’s placed the traps — greenhouse flats with a hammock of landscape fabric and mesh to keep rodents out — in areas with varying densities of snags and vegetation. Some he placed among tightly spaced dead trees and others in areas with only a few scattered branches. He’ll check the traps in the fall, counting seeds to see if the snags interfere with seed dispersal. The team members hypothesize they will find fewer seeds in the reburned areas than older burned forests, and fewer of them the farther away they sample from the unburned edge. If they’re correct, it could show reburned areas have a harder time at regenerating and recovering from the frequent fires wrought by climate change.

Tyler Hoecker, a Ph.D. student on the team, is studying how, once dispersed, lodgepole pine and Douglas fir seeds grow in these recently burned areas, which are typically sunnier and hotter than unburned areas. Hoecker has seed trays, about 20 inches by 10 inches, that contain either 50 planted seeds of Douglas fir or 50 seeds of lodgepole pine, as well as control trays with zero seeds. In late spring, he set up 12 study plots with the trays equally dispersed among locations on south-facing slopes (presumably warmer and drier), north-facing slopes (expected to be cooler and wetter), and flat sites predicted to be in between. The team hypothesizes fewer seeds will survive on south-facing slopes and at lower elevations since those locations are generally hotter and drier. Every two weeks, Hoecker hikes to each site, recording which seeds germinate, how many survive and how well they grow.

Tyler Hoecker retrieves data from an instrument that tracks soil and air conditions like temperature, moisture and wind in a twice-burned site. (Credit: Kristen Pope)

At these sites, Hoecker has embedded sensors in the ground to collect data on soil temperature and moisture, while meteorological stations at each site collect data on air temperature, humidity and solar radiation. Camera traps keep an eye out for curious critters that may interfere with the results.

“[It’s been surprising] just how warm it can get right below the soil surface,” Hoecker says, noting soil temperature is often much hotter than the air temperature and can reach over 100 degrees Fahrenheit.

The results of this study could help scientists understand the mechanisms and then anticipate how different trees will respond to different conditions.

Forests From the Ground Up

Eventually the seed dispersal and growth data, along with other data points, will be plugged into an “individual-based forest process model” developed by one of Turner’s colleagues, Austrian ecologist Rupert Seidl. The model, called iLand, is designed to address the changing dynamic of forests, and can be modified for use in different forest types. The Yellowstone data is used to examine how species such as lodgepole pine and Douglas fir will fare and regenerate under different scenarios, including ranges of climate, fire frequency and distance from seed sources.

“An important aspect about his model is that it’s basically building from the ground up,” Turner explains, noting that the model is based on tree physiology and relies on daily data about solar radiation, precipitation and temperature.

“When we’re looking out into this century where the conditions are really different than anything we’ve seen in our historical record, we can’t assume that relationships that were represented maybe 40 years ago are going to hold in the future,” Turner says.

While Turner and her collaborators are working to develop new tools to examine fire, she reflects on the fundamental changes at hand. “I think that the rules of the game are changing now in the sense [that] the recovery that we see in the future may not be the same as we have seen in the past,” Turner says. “Our systems are often more resilient than we think, but I also think we might be pushing them to breaking points.”

This article originally appeared in print as "Burn Notice."