Why, Oh Why, Did San Francisco's Famous Sea Lions Disappear? 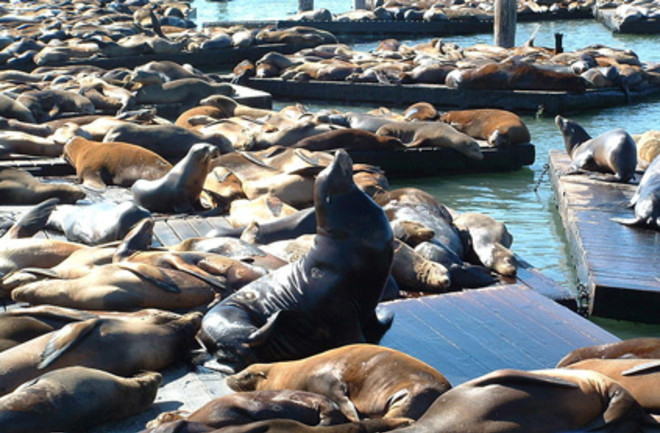 After 20 years in one spot, anyone can get restless. That goes for the famous sea lions of San Francisco's Pier 39. They swelled to their largest population ever just a couple months ago and then almost totally disappeared this month, baffling local marine experts.

The animals have been a fixture on Pier 39 since 1990, when a big herring run lured the sea lions into San Francisco Bay. The Marine Mammal Center gets so many questions about the 1,000-pound creatures that the nonprofit staffs a small kiosk on Pier 39; the pier's insignia includes the silhouette of a sea lion [San Francisco Chronicle]

. In October more than 1,700 sea lions laid about on Fisherman's Wharf. But the exodus began the day after Thanksgiving, and by yesterday only 10 remained hanging out near the docks. Jeff Boehm of the Marine Mammal Center said the sea lions probably left in pursuit of a food source, the same reason they would've come to Pier 39 in the first place.

. That is, sea lions tend to travel far and wide rather than sticking it out in one place for so long. Boehm and other scientists can't say for sure why the lions picked this particular moment to depart, either. It's an El Niño year in the Pacific, but the effects have been moderate, San Francisco's weather has been close to normal, and other animals don't seem to be affected. The marine scientists aren't too worried about the sea lions' welfare, since they're typically travelers, and Boehm and company say the marine mammals could very well return next year. That would be a consolation prize for organizers of the 20th anniversary celebration for Pier 39's sea lions planned for Jan. 15; they saw their guests of honor bolt at the last minute.

“The party will go on nonetheless,” said Sue Muzzin, a spokeswoman for Pier 39. “Well, I think it will” [The New York Times]

. There are some people, though, who wouldn't necessarily complain if the droves of sea lions never return: fisherman.

One recently told a local radio station, “They’re cute when they’re in here lying on the docks by Pier 39, but they’re not too cute out in the ocean when they’re stealing your livelihood” [Wired.com]

. Related Content: 80beats: Who Would Win in a (Legal) Fight: A Whale or a Battleship? Discoblog: Sixty Thousand Sturgeon Have a Group Hug in Oregon The Intersection: Sea Lions and Dolphins and Polar Bears! Oh, My! DISCOVER: Rio, the Logical Sea Lion