Sixty Thousand Sturgeon Have a Group Hug in Oregon 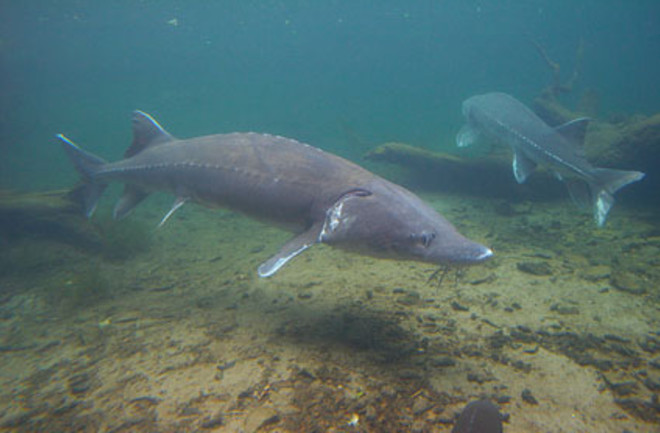 Even a big fish needs to be held sometimes. Army engineers in Oregon saw a big blip on their sonar readings near the Bonneville Dam on the Columbia River, which they assumed to be a pile of debris. Instead of junk, they found sturgeon. About 60,000 of them had gathered in a huge congregation 40 to 50 feet below the surface of the river, and U.S. Geological Service biologist Michael Parsley said his estimate could be on the conservative side. In an undersea cuddle party, these fish lie on top of one another, some of them upside down. Army divers took this video of the gathering. The fish, which can grow as long as 14 feet, seem pretty happy with their situation, but biologists have little idea why they do it -- for all the worries about salmon, another resident of the Columbia, fewer people study sturgeon, so they remain more of a mystery. The fish could be seeking safety in numbers from sea lions, their primary predators. But scientists have spotted sturgeon in large groups, though not this large, at other points in the river where no sea lions were present. It's more likely the fish gain some kind of advantage from lying around with 60,000 of their friends, doing nothing. Perhaps they are conserving energy to stay warm in the cold Columbia waters. Now if only mass lallygagging were so good for us.