Why have sex with someone else when you could do it with yourself?

By directing the evolution of a worm, scientists have confirmed answers to the age-old question: "What is the point of having sex with someone else?" For most people, that would hardly be a tricky query but it's no reflection on the lives of evolutionary scientists that sex has been one of biology's oldest puzzles. 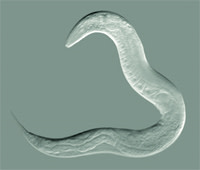 The problem is this: many creatures can reproduce by fertilising themselves instead of getting someone else to do it, and at first glance they should do much better individuals that cross-fertilise. For a start, they'd ensure that all of their genes reach the next generation, while mating with another individual reproduction halves their genetic legacy. And without having to find males, self-fertilising females should be able to produce twice as many offspring. This is the "two-fold cost of males".

And yet, cross-fertilisation is the more common strategy in the animal world, so it must have advantages that compensate for its cons. Scientists typically name two. The first is that by shuffling the genes of two parents, cross-fertilisation deals the next generation with a fresh genetic hand, better equipping it to rapidly adapt to changing environments, predators and parasites. The second is that having sex with someone else prevents harmful mutations from building up (the genetic defects that plague inbred families would be even worse in lineages that only ever have sex with themselves). They're the same reasons why sex itself is usually a better long-term solution than asexual cloning.

The problem is that both of these explanations have proven very difficult to test. But that didn't stop Levi Morran and colleagues from the University of Oregon, who demonstrated that both justifications are correct, by manipulating the evolution of the nematode worm Caenorhabditis elegans.

Like humans, C.elegans has two sexes but unlike us, they are males and hermaphrodites (with males making up just one in every two thousand individuals). Equipped with both sets of genitals, hermaphrodites worms can fertilise themselves without male help - far from being rude, telling C.elegans to go &$&! itself is a feasible lifestyle suggestion. Hermaphrodites could also mate with males, but they do that on less than one in 20 occasions.

However, the genetics of this animal are so well-known that Morran managed to use two mutations to create strains of C.elegans that either always had sex with themselves, or always had sex with other worms. Morran subjected these two engineered strains, as well as a normal one, to two challenges.

Some were exposed to a chemical called ethyl methanesulphonate (EMS) that quadruples the normal mutation rate of DNA, riddling their genomes with potentially harmful genetic changes. To make matters worse, they were placed in a new environment that should weed out all but the fittest individuals.

Despite these challenges, the strain that always mated with others were still successful after 50 generations and fared much better than the strain that only had sex with itself. Even the normal worms moved towards a cross-fertilising strategy under these harsh conditions. These are all signs that having sex with others else provides a way of purging harmful mutations from a population. By contrast, Morran estimated that the genetic burden carried by the worms that only ever mated with themselves would drive them to extinction after a few hundred generations.

Morran also exposed some of his worms to a bacterium called Serratia marcescens, a bacterium so virulent that it kills 80% of the worms it infects. It was a test of their ability to rapidly adapt to new challenges, and one that the cross-fertilisers passed with flying colours. They quickly evolved to resist the bacterium, while the populations that only mated with themselves did not. As before, the normal worms shifted towards a cross-fertilisation strategy when faced with the new threat.

So both theories are correct - compared to having sex with yourself, doing it with someone else provides a way of resisting harmful mutations and adapting quickly to new challenges. Morran says that species that evolve to always self-fertilise become trapped in an "evolutionary dead-end" and are "ultimately doomed to extinction".

More on sex and reproduction: