Why do female seed beetles prefer the sperm of inferior males?

You've got to feel sorry for the female seed beetle. Whenever she mates with a male, she has to contend with his spiked, nightmarish penis (remember this picture?). And despite the damage that it inflicts, one liaison just isn't enough; female seed beetles typically mate with many males before they lay their eggs. Surely, she must benefit in some way?

The most likely idea is that she somehow ensures that her eggs are fertilised by sperm from males with the "best" genes - those that either make for particularly fit and healthy young, or that are a compatible match for the female's own genes. Perhaps these sperm outrace their weaker peers, or maybe the female has a way of selectively letting through the best quality sperm. It would be a reasonable explanation were it actually true. Sadly, reality isn't that kind to the female seed beetle.

Trine Bilde from the University of Uppsala has found that after females mate with two different males, it's actually the sperm from the lower-quality specimen that fertilises most of her eggs. Even though the paragon's sperm would sire more successful offspring, it's the loser who ends up fathering most of her progeny. 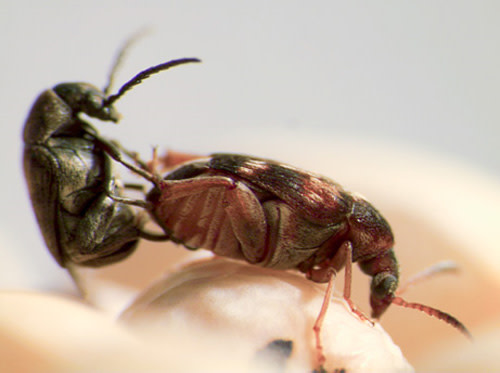 Bilde discovered this puzzling behaviour through her attempts to understand why female animals often mate with many males. In some cases the benefits are obvious for males will often ply their mates with nuptial gifts - packages of food, for example, that reward them with nutrients in return for fertilisation privileges. But in cases where such gifts aren't apparent, evolutionary biologists have suggested that females get an indirect genetic advantage, boosting their odds of finding a male with top-quality material in his genome.

To test that idea, Bilde worked with seed beetles. Bilde mated a large number of genetically diverse beetles and for each female, she ranked potential male partners according to their genetic quality. High-quality males were those who sired the most offspring with a female, and whose own offspring enjoyed the greatest amount of reproductive success themselves. Essentially, the best males were those who bred the most children and grandchildren. Obviously, different females will vary in their ideal partners but this initial round of breeding revealed which individuals were suited to each other and which were dud matches.

Bilde then mated test females with two males, one of high quality and the other of low stock. The results were completely contrary to what most biologists might expect. The low-quality male, whose sperm would produce fewer healthy descendants, ended up fertilising a larger proportion of the female's eggs. On average, a female's success was 18% higher with a high-quality partner. Likewise, matches between females and superior males bore daughters whose reproductive success was 17% higher than those borne of pairings with inferior males. And yet, it was the low-quality males who fertilised the lion's share of her eggs.

It's worth noting at this point that it's very clear that female seed beetles can exert a degree of choice over whose sperm fertilises her eggs. Past experiments have shown that females show preferences for males of a certain genetic background, depending on their own array of genes.

So given that, what could explain the puzzling choice of the females? Conflicts between the sexes may have something to do with it. In their past research, Bilde's group have shown that males that engage in sperm competitions often evolve adaptations that increase their odds of victory but harm their mates as a side-effect. The horrifically spiny penis of the seed beetle is one such adaptation.

Even genes can do battle with one another, if they are beneficial to one sex but harmful to the other. For example, this could mean that the same genetic legacy inherited from a successful father might make for equally successful sons but unsuccessful daughters. Perhaps the so-called "low-quality" males, despite fathering less successful daughters, were also producing sexual dynamos for sons, who begat a huge generation of grandchildren.

Unfortunately, Bilde's team didn't analyse that but she notes that given the lower success of the daughters, any benefits to sons would have to be very large indeed to compensate. For the moment, we can't rule out this theory, but there isn't any solid evidence for it either.

Genetic conflicts between the sexes can play out in another way. Imagine if a gene increased the odds of a male winning a sperm competition and fertilising eggs, but reduced the fitness of any daughters. Again, such genes help one sex and harm the other and their carriers would fertilise many eggs despite being low-quality in the eyes of the female.