Termite queen avoids inbreeding by leaving a legacy of clones

Termite colonies are families - millions of individual workers all descended from one king and one queen. But the colony itself tends to outlast this initial royal couple. When they die, new kings and queens rise to take their place. These secondary royals are a common feature of some families of termites, and they will often mate with each other for many generations. But there is more to this system than meets the eye. 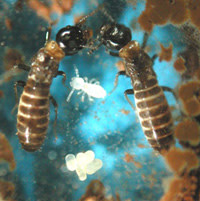 Kenji Matsuura from Okayama University has found that the secondary queens are all genetically identical clones of the original. There are many copies, and they have no father - they developed from unfertilised eggs laid by the first queen through a process called parthenogenesis. These clones then mate with the king to produce the rest of the colony through normal sexual means.

It's a fiendishly clever strategy. The original queen's legacy to the colony is... herself. She effectively splits herself into several different bodies and in doing so, greatly increases the number of offspring she has. And because each of these descendants mates with the king, who has no genes in common with them, the colony neatly skirts around the problems of inbreeding.

Matsuura collected 30 natural colonies of a Japanese termite Reticulitermes speratus and they found that in all but one of these, the original queen had been replaced with several secondary ones - a total of 1,660 between the various nests. However, the majority of the colonies were still home to the original king, and the remainder had a single secondary one. This suggests that the king always 'rules' alone, and does so for a longer period of time than his mate.

When Matsuura analysed the genes of 135 secondary queens from seven different colonies, he found a surprise. Virtually all of them from any given colony were genetically identical to each other, and in the one where the original queen was still alive, her successors' genes were perfect matches for her own. And none of these termites had any genetic variants in common with the kings from their respective colonies.

Clearly, the first queen had spawned her successors without any help from the king. The same thing didn't apply to other members of the colony. Matsuura tested 20 workers from each colony and found that every single one was the product of sex between a queen and a king.

To confirm this, Matsuura checked for signs of inbreeding among the workers. Because the father and mother of inbred individuals are related, they have a higher-than-average chance of carrying the same copies of any given gene, as opposed to two slightly different versions. This wasn't the case for the worker termites - they had high levels of "heterozygosity", meaning that they frequently carried two different versions of the same gene.

This obviously benefits the queen. Even after she dies, she had effectively started an entire dynasty of herself, each of whom will produce huge numbers of daughters. And because these daughters are produced by the usual sexual congress between king and secondary queen, the levels of genetic diversity within the colony remain high. The king benefits too - it's likely that the offspring he sires by mating with the various clones of his queen will be healthier and fitter than those he would produce if he had to mate with his own daughters