It turns out that female bodies, rather than male egos, have driven the bizarre phenomenon of giant sperm and, as it turns out, a whole lot else. 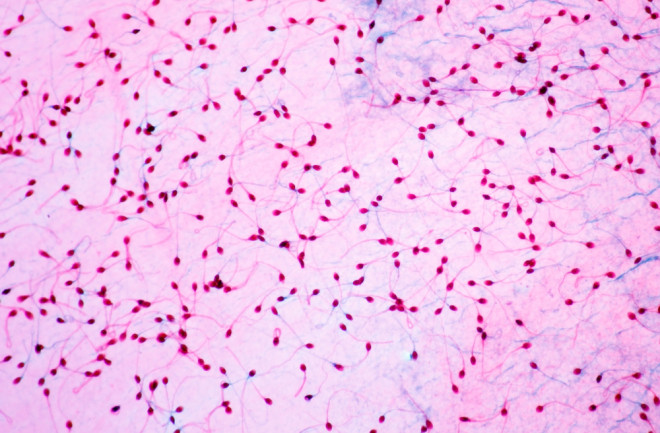 No cell in the human body is more ambitious than sperm, it seems. It’s the only cell that performs the job usually reserved for entire organisms: leave your home, and survive long enough to reproduce.

To accomplish this, sperm has evolved as the most diverse of all cells. Most of us picture one as a tiny swimmer with a head and a long tail. But sperm cells can vary widely in appearance based on the creatures they inhabit. Crustaceans called ostracods have sperm cells consisting almost entirely of the head. Some mollusks produce spermatozeugma: a type of giant helper sperm that fertilizing swimmers cling to like smushed commuters cling to bus rails.

Even more astonishing than their variation in appearance is their variation in size. The standout example occurs with Drosophila bifurca, a North American fruit fly that measures less than half an inch long. Yet the tiny insect produces sperm up to nearly 3 inches long.

In fact, these are the longest sperm in the world (even when accounting for body proportions). They dwarf sperm from humans, chimps, fish, sharks, and even whales. Drosophila Bifurca sperm outsizes that of its entire giant swimmer-producing family. But many other invertebrates also make sizable sperm, such as the Scutigera genus of centipedes and the Notonecta backswimmers.

These gargantuan sperms’ origins have remained a mystery. But a June Nature Ecology & Evolution study has shone a light on the true drivers of giant sperm, along with its overall diversity: females.

Getting To Know Giant Sperm

Ariel Kahrl, an evolutionary biologist at Stockholm University and co-author of the recent article, explains that she and her colleagues wanted to understand the hows and whys of sperm evolution.

Such research could explain why Drosophila Bifurca, for example, make sperm about 20 times the size of their body. “That range is the difference between a grain of rice and a commuter train — a huge diversity in size," she says. “A lot of people tried to understand where it comes from by looking at specific groups: birds, fish, insects. Nobody’s really taken a step back to try and apply principles of evolution in a broader framework.”

The scientists also theorized that internal fertilizers and sperm casters present a relatively large diversity of sperm length because their swimmers have adapted to keep up with female reproductive tracts.

All in all, they analyzed over 3,000 species from 21 animal phyla, from sponges to arthropods to chordates (like us). They organized them by vertebrates and invertebrates, and by fertilization method — external fertilizers (broadcasters), internal fertilizers and sperm casters. Then they constructed a tree of life that included each species and mapped their connections to compensate for species’ relationships (these needed to be compensated for to avoid bias in the results).

“We found that what we hypothesized was true,” she says. The sperm of internal fertilizers measured, on average, about six times longer than that of broadcasters; sperm has evolved much more quickly in internal fertilizers and sperm casters, and they tended to exhibit more size variation.

Of the internal fertilizers, almost all of the giant sperm lived within the invertebrates, she says. Their bodies are small enough that sperm can grow large enough to displace one another. Imagine groups of runners racing each other across a field, and the first finisher wins for their entire team. In a small, crowded field, it’s worth being big enough to give yourself elbow room. In a massive field, a high number of team members can ensure victory.

The Second Sex in First Place

The fastest-evolving sperm tend to make the most contact with the female reproductive system, according to the study. The size of both that system and the sperm it interacts with are tightly correlated, Kahrl says. Put together, these factors suggest that females drive sperm evolution, she says.

“It's a marvel. It’s just Herculean, what they did,” explains Scott Pitnick, a fellow sperm scientist at Syracuse University. Their questions were fairly simple, but those can be the most difficult to answer, he says.

Until recently, it was impossible to comb through this much scientific literature and achieve the necessary computer processing power to carry out comparative biology. The team also made the resulting massive database publicly available, which will allow other researchers to draw on their work.

The recent paper also highlighted the most important — and least asked — question in the entire field, he says. How do sperm interact with females? “The reality is that there’s been this massive male bias in biology,” he says. “We know squat about female reproductive tracts.”

After all, a sperm cell aims to navigate the female reproductive tract efficiently enough to fertilize an egg. Studying sperm in males or microscopes while neglecting female anatomy is like “doing comparative biology by only going to the zoo,” Pitnick says. The old paradigm of sperm quality versus quantity always weighed in favor of the latter because scientists couldn’t account for the female’s role, Pitnick explains.

What’s more, sperm cells often don’t finish development until they’ve entered the female, a process known as Post-Ejaculatory Modifications to Sperm (PEMS). Many core sperm proteins, like metabolic proteins, come from females, he says. And observing sperm modifications across the animal kingdom reveals a host of oddities, like sperm that increase tenfold in length or turn inside out within the female.

“We’re still in the Dark Ages of the biology of studying females,” Pitnick says. “This [paper] puts a fine point on it. If we want to understand diversity, we have to let this bias of the past go, and turn our attention to female biology.”