Why Does Australia Have Some of the Deadliest Creatures on Earth?

From snakes to spiders to scary sea creatures, the world's smallest continent has it all. But how unique are they? 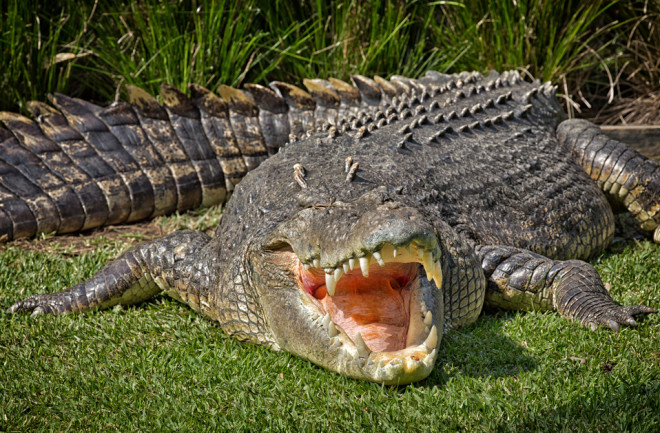 Australia is home to some of the deadliest creatures on Earth. From snakes to spiders and scary sea creatures, this continent has it all. The inland taipan, for example, is known as the world’s most venomous snake. A 16-foot saltwater crocodile can make dipping your toes in the waters off Australia’s northern coast a spine-chilling event. And then there’s the box jellyfish, stonefish, blue-ringed octopus, Sydney Funnel-Web Spider and the great white shark, to name just a few. So it begs to question: How did the world’s smallest continent end up with so many killers?

According to Kristofer Helgen, a biologist and chief scientist at the Australian Museum, the continent lays claim to so many deadly creatures partially because of continental drift. “It’s the most isolated continent on the planet and it’s been drifting towards Asia ever since it separated from Antarctica 30 million years ago,” says Helgen.

A number of animals came from islands north of Australia millions of years ago. For example, elapids — a family of famously venomous snakes – swam to the continent via the island archipelagos off Asia, he says.

Additionally, many of the species that were already present in Australia like marsupials and the platypus (the only egg-laying mammal) have evolved in isolation in some cases to become more dangerous. The male platypus is one of the few venomous mammals on Earth. Its abdominal venom glands deliver poison via a spur in their hind legs. The purpose, according to scientists, is to fend off rival partners during mating season.

Saltwater crocodiles can be found in 15 other countries including India, Myanmar, The Philippines, Papua New Guinea and the Solomon Islands. Likewise, the great white shark is found in waters throughout the world. And the same is true of the blue-ringed octopus, a small but deadly creature capable of killing 26 humans with its golf ball-sized vat of venom. But it doesn’t just live in Australia, it lives throughout the Pacific Ocean and can also be found in the Sea of Japan as well as The Philippines and Vanuatu.

And while shark and croc attacks get tons of press, in Australia they’re exceedingly rare. “We are much scarier to sharks than sharks are to us and their persecution is causing a drastic drop in their numbers,” says Helgen.

Yes, Australian’s deadly creatures make for a good story. But while these venomous spiders and snakes punch above their weight in potency, they aren’t the most deadly or aggressive. While the inland taipan is the most venomous snake in the world, it tends to be more docile than many others, especially compared to deadly species like Africa’s black mamba, which reportedly kills 20,000 people per year.

A much lower population density and ample anti-venom treatments for nearly all the venomous species on the continent, mean the chances of being seriously injured or killed by an Australian snake or spider are minuscule. Compared to India — where snakes kill more than 50,000 people a year — they kill one or two a year in Australia, says Helgen.

While Australia can claim a sizable number of venomous species, they also have some of the least threatening mammals on Earth. Dingos and koalas are hardly as scary as African elephants or North American grizzly bears.

But according to Michael Archer, a paleontologist and professor at the University of New South Wales, a window into Australia's evolutionary past shows that the continent’s prehistoric mammals would put most of our present-day species to shame.

“The marsupial lion, which went extinct 30,000 years ago, was as big as an African lion with a much larger brain,” says Archer. “It also had some of the most specialized killing mechanisms of any of the mammals that have ever evolved on Earth, with gigantic bulk cutting teeth and can opener-like thumb claws that could rapidly rip into prey.”

The fossil record also shows there was once a flesh-eating kangaroo called the Procoptodon goliah that was taller than a human, as well as a giant wombat that weighed as much as two tons. But climate change, Archer says, caused these mega-beasts to go extinct around the time humans arrived on the continent.

“The Australian bush would have been a much scarier place 50,000 years ago,” says Archer.