Why Dandelion Seeds Are So Good At Floating 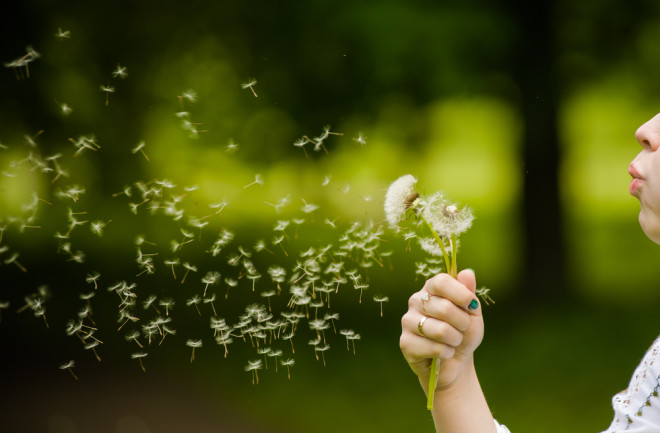 Dandelion blowing may be about as close to a universal experience as there is. Kids and adults alike delight in huffing the white fluffy seeds from a dried sample of Taraxacum officinale, and watching them fly away.

But as with all things in nature, it only happens that way because it works. Dandelion seeds can travel for miles before setting down, making them particularly efficient fliers. And scientists didn’t really know why. Other plant seeds, such as maples, use more of a wing-like design to get airborne, so there must be a reason the brushy, plumed seeds worked for dandelions.

Well, according to a paper published Wednesday in Nature, a team of physicists in Scotland have found that reason: a special kind of air bubble that forms above each seed, which helps keep it aloft longer. It’s literally a new kind of flying, and it doesn’t just help scientists understand dandelions better — it opens up a new avenue for exploring all kinds of movement in the air and beyond.

The first part of the study was simple enough, just studying the design of a dandelion seed with ultra-precise X-ray scans and regular light microscopy. The authors dutifully report that each pappus, the bristly head of a seed, contains 100 rod-like filaments on average, each about 7.4 mm long and 16.3 μm thick. They also found the porosity of the pappus is nearly 92 percent, meaning it’s mostly empty space up there.

Now the cool part. The team placed dandelion seeds in a vertical wind tunnel which kept them floating indefinitely, effectively hovering at a fixed height. Then, with long-exposure photography and high-speed cameras, they analyzed the behavior of the air as it moved through the bristles of the pappus. That’s when they discovered the air bubble, always trailing a fixed distance downstream (so, above) the seed.

Technically, though, it’s not really a bubble; the authors call it a separated vortex ring (SVR). Instead of just a ball of air, like a true bubble, this vortex is more like a stretched-out donut, very tall with a long thin hole down the middle. As air flows up through the pappus, it hits the outside of the SVR, then gets caught up in the flow and follows it inward, down the hole. It emerges on the bottom end and starts to flow back up again, restarting the cycle.

All this ends up creating a tiny spot of low pressure directly above the floating dandelion seed, slowing its descent through the air.

So not only does the pappus of a dandelion seed create this SVR, but the authors determined it’s also perfectly engineered to stabilize the pocket of air. That’s crucial — similar kinds of air bubbles had been theorized before, but scientists had considered them too unstable to actually form in real life. They didn’t reckon with the power of a pappus’ porosity!

By testing their own versions of dandelion seeds with varying designs, the authors saw that dandelion seeds had naturally settled on practically the most efficient means of creating and keeping that crucial SVR going. That 92 percent porosity was the key.

As the authors write, “By uncovering the physics behind the flight of the dandelion, we have discovered a novel type of fluid behaviour around fluid-immersed bodies.” (The term “fluids” refers to both gases and liquids, which always makes me wonder why physicians aren’t more specific.) Basically, the team discovered a brand-new method of flight that nature’s been exploiting since forever.

Similar structures are “commonplace in the biological world,” they write, so the finding might also help scientists understand how other plants and animals get around, both in the air and underwater. And there’s a chance this could also help engineers come up with better tools to navigate those fluids, too.

Something to consider, perhaps, the next time you find yourself blowing apart a dandelion, scattering its seeds to the wind.