Why Baby Animals Can Walk So Much Sooner Than Human Infants

The early, shaky baby steps in many mammals stem from basic survival skills, while baby humans are prioritizing other biological needs. 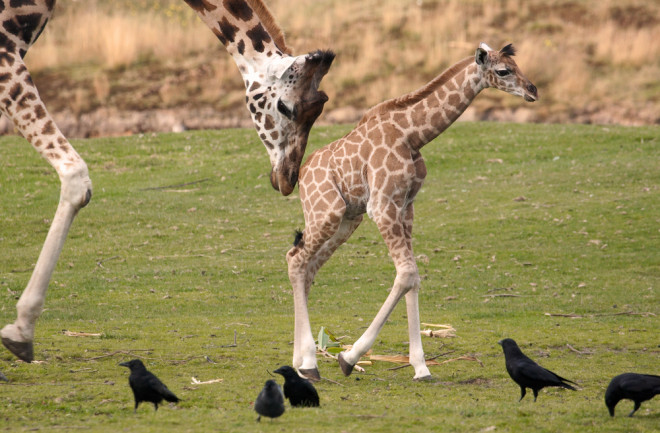 Watching a newborn lamb or giraffe take its first steps can be simultaneously cute and painful. In these and other early-to-walk species — typically larger grazing animal — the wobbles are sweet, but the falls are hard. Limbs sometimes bend in ways that would mangle your own legs. “The first 24 to 48 hours, they're still pretty awkward,” says Sarah Reed, an animal biologist at the University of Connecticut.

Once the early learning phase passes, a cow, horse or zebra less than one week old can literally run circles around human infants of the same age. Many large, grazing mammals develop this way. And though it might seem strange from our perspective, learning to walk — or more specifically, get out of harm's way — is one of the simplest survival strategies around. Truthfully, the fact that a human baby does so little for so long makes us the odd species out.

Those shaky first steps from a lamb or calf serve a purpose: To evade predators. “We see a lot of prey animals that are precocial, which means that they can stand and move fairly soon after birth,” Reed says.

For wild animals like zebras and giraffes that live in wide-open spaces, the only real defense they have against predators is to run. Forest-dwelling species can tuck their young into the foliage and trust that it will be safe without supervision for a while — that’s what mother deer do with fawns for days at a time. But savannas and grasslands offer minimal hiding spaces. The sooner a newborn can outrun a predator, the better their odds of survival. And though domesticated animals like cows aren’t often hoofing it to avoid being eaten, their wild ancestors likely did.

The ideal accommodations and conditions for early-walking animals typically starts in the womb. After gestation, these babies emerge with a higher percentage of bone and muscle making up their body weight, Reed says, so the baby has the equipment it needs to stand up. “If you look at a foal when it's born, it looks like skin and bones,” Reed says — hardly any fat and just the little amount of muscle development it needs to move limbs.

Wolf pups or tiger cubs look and behave a lot different a few days after birth. Atop the food chain, these predators can take a more leisurely pace when it comes to growing up. They don’t have to worry about escaping another species’ claws. In these animals, it takes time for newborns to open their eyes, let alone walk. Animals that hunt other animals typically require more time to develop coordination and motor skills, abilities they need to protect themselves and capture their food.

Humans are born with capabilities and characteristics that look the most different from what we become as we mature. “Personally, maybe it’s the anthropologist in me coming out — we are very much mammal, but we’re also kind of a very weird mammal,” says Teresa Steele, a paleoanthropologist at the University of California, Davis. “Our babies are born exceptionally underdeveloped.”

Like in other mammals, all the muscle cells we’ll ever have are present when we are born. The cells, which stretch the length of every individual muscle they are in, only grow wider and longer as we age. But in other ways, human infants are drastically different.

A full 15 percent of a human baby’s body weight is fat — a higher percentage than in any other species. When we are born, the shafts of our longer bones hold a lot of soft, flexible cartilage, and many joints are separated. Even the different bones that make up our skull have yet to fuse together.

Similar to other species' need to stand right away, our inability to do much at all as newborns is a byproduct of other biological needs. For one, we move around on two legs with our hands free to hold tools, something not all our ancestors can claim. Our hips are narrower than in other primates to keep us from waddling side to side while walking. At the same time, we have big brains: Our organ is about seven times bigger than it is in other similarly-sized animals.

In theory, we could use a wider pelvis to make birthing that large head easier. But walking pressures our hips to stay narrower. A less-developed baby meets both demands, Steele says. “The compromise between a narrow birth canal and a big-brained baby is to have the babies early.” Our bodies go one step further to ease childbirth by keeping infant skeletons slightly squishier and more flexible so they can squeeze through the delivery process. “You don't want a mineralized skull when that happens, thank goodness,” Steele says. “As a mom, that would be terrible.”

Coming out of the womb underdeveloped compared to other species means we spend years with parents and people who help raise us. “One of the trade-offs is we have this amazing capacity to to learn and innovate," Steele says.

Depending on adults for many years gives us that much more time to put those larger brains to work, figuring out not just how to move, but eventually developing the skills necessary to tame other species and sit around wondering why they can walk so early — something those animals will never do, no matter how old they are.