Q: Why don’t apes have bigger brains? A: They can’t eat enough to afford them 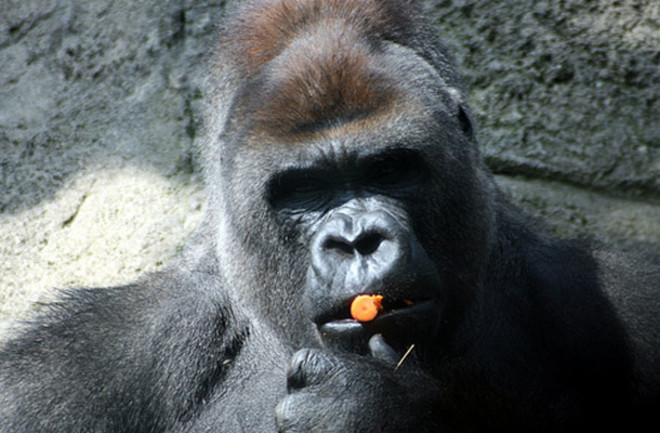 As animals get bigger, so do their brains. But the human brain is seven times bigger than that of other similarly sized animals. Our close relative, the chimpanzee, has a brain that’s just twice as big as expected for its size. And the gorilla, which can grow to be three times bigger than us, has a smaller brain than we do.

Many scientists ask why our brains have become so big. But Karina Fonseca-Azevedo and Suzana Herculano-Houzel from the Federal University of Rio de Janeiro have turned that question on its head—they want to know why other apes haven’t evolved bigger brains. (Yes, humans are apes; for this piece, I am using “apes” to mean “apes other than us”).

Their argument is simple: brains demand exceptional amounts of energy. Each gram of brain uses up more energy than each gram of body. And bigger brains, which have more neurons, consume more fuel. On their typical diets of raw foods, great apes can’t afford to fuel more neurons than they already have. To do so, they would need to spend an implausible amount of time on foraging and feeding. An ape can’t evolve a brain as big as a human’s, while still eating like an ape. Their energy budget simply wouldn’t balance.

Our ancestors overcame this constraint when they learned how to cook. Cooked food offers more calories than raw food, and is easier to chew and digest. These early chefs could gain more energy from the same amount of eating time. That, in turn, fuelled more neurons and larger brains.

Fonseca-Azevedo and Herculano-Houzel developed their argument using data on 17 species of primates, from the tiny common marmoset to the huge gorilla. They collected figures on the average brain and body sizes of many primates from past papers. They worked out the number of neurons in various primate brains, by painstakingly inspecting their own samples. And they took data collected by Callum Ross and others on the number of hours that these species spend eating.

From these figures, they calculated the maximum number of neurons that each species can afford, given different amounts of feeding time. You can see the results in the graph below. There are clear boundaries. As Fonseca-Azevedo and Herculano-Houzel write:

How did our ancestors manage? In earlier work, Fonseca-Azevedo and Herculano-Houzel had estimated the numbers of neurons in early hominins (human relatives who arose after our lineage split from chimps). The earliest hominins, such as Australopithecus afarensis (of which the famous Lucy was an example), had around 30 to 40 billion neurons, and could’ve maintained those by eating an ape-like diet for 7 hours a day. No problems there.

But the later Homo erectus had around 62 billion neurons. If it ate raw food, it would’ve needed to feed for more than 8 hours a day. Even later species like Homo heidelbergensis, Neanderthals, and our own relatives, would’ve needed to eat for 9 hours a day. Fonseca-Azevedo and Herculano-Houzel think that our ancestors, probably starting with Homo erectus, only managed by learning to cook.

Opinion is divided on the study. Richard Wrangham from Harvard University likes it. After all, he has long argued that cooking helped to fuel the evolution of our large brains. “I love their study because it is the first to have yet commented on my proposal that cooked food enabled brain expansion,” he says. “Their calculations look reasonable; and their broad conclusion is of course directly in line with mine.”

But he adds that Fonseca-Azevedo and Herculano-Houzel haven’t accounted for the types of food that primates eat. They assumed that raw animals foods, such as meat, brains, marrow and fish, wouldn’t provide enough extra calories to break the constraints that apes face, and Wrangham agrees with them. But other scientists think otherwise.

Karin Isler from the University of Zurich, who studies brain size evolution, isn’t at all convinced by the study, especially since Fonseca-Azevedo and Herculano-Houzel haven’t accounted for the quality of a species’ diet. Since other great apes females are actually smaller than human women, “the whole argument is mainly based on the gorilla,” Isler says. Gorillas eat a lot of leaves, and have to spent more time eating to extract the same number of calories as apes with other diets. That alone might explain why their brains aren’t bigger. Could a move towards animal protein and fat explain the bigger brains of humans without needing to invoke cooking? The study doesn’t answer that question either way.

Wrangham clearly thinks otherwise, but he says that we need more research to settle the matter, including some estimates of how quickly primates can digest raw animal foods.

Image of gorilla by Jarapet; graphs from paper