Who Were the Mysterious People of Ancient Jiroft?

One of the oldest cultures in the world may have traded with the Sumerians and Indus Valley. 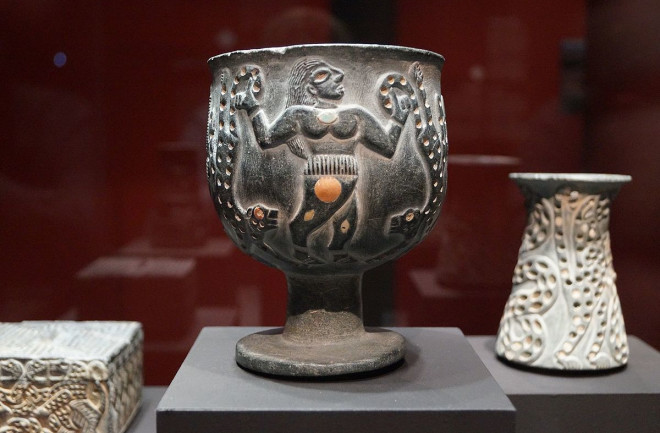 The dark greenish stone and bronze vessels had always been a mystery. Dating at least five millennia back, these chlorite, bronze and ceramic containers, vases and other decorative objects were covered in mythological scenes depicting snakes, eagles and scorpions. There were human bodies with bull heads and other anthropomorphic figures. They were found widely, in archeological digs from the Indus Valley in modern day Pakistan to the Persian Gulf and as far north as Gonur Depe, a site in Turkmenistan.

“The origin of these vessels was completely unknown,” says David Meier, an archaeologist with the University of Tehran.

Iranian police began to confiscate some of the items in 2001. These looted artifacts were believed to come from two mounds in the county of Jiroft in southern Iran, according to a publication by Iranian archaeologist Youssef Madjidzadeh.

But research in the two decades since by Madjidzadeh and others has helped to illuminate more about a culture that extended its influence through the trade of its goods as early as the 4th millennium B.C. This is more than 2,000 years before the start of the Achaemenid Empire — the first Persian Empire founded by Cyrus the Great in 550 B.C. These dates put the Jiroft culture as one of the oldest civilizations in the world, though little still is actually known about the people who lived there.

It’s uncertain when, exactly, the civilization there began. But Meier says the Jiroft culture reached its peak between 2500 to 1800 B.C., which means it would have overlapped with Mesopotamian cultures like the Sumerians and Akkadians.

There isn’t much evidence of writing preserved from Jiroft, but we do know that they had some system of writing based on a couple of preserved clay tablets. Meier says they portray a type of pictogram-based writing system that still isn’t well-understood known as Middle Elamite. Some iconography preserved on ceilings at Jiroft also overlapped a little with Mesopotamian themes.

While researchers may refer to the culture as Jiroft now, that’s a relatively recent name for the region. We aren’t sure what it was called back in its own time, though Meier says there are a few surviving clues. The Sumerian legend of Enmerkar and the Lord of Aratta, for example, mentions that Aratta is somewhere to the east of the Sumerian territory, which some researchers have interpreted as possibly being Jiroft.

Meier believes in another interpretation, though, as he says it’s unclear whether Aratta is a real, historical place or just mythology. Mesopotamian texts mention battles that took place in Marhashi, a civilization on the Iranian plateau in the third millennium, as well as various other dealings.

Even if the texts aren’t exactly clear about Jiroft, the materials left behind paints a clearer picture about some aspects of the civilization. The southern Konar Sandal mounds were first excavated by a Hungarian-British archaeologist Aurel Stein in the 1930s. But while Stein made a few descriptions and collected some pottery, he didn’t have a good idea of what he had found, Meier says.

Since then, the area hasn’t received nearly the attention as other famous sites more or less contemporary to Jiroft such as the Sumerian cities of Uruk or Ur. A flood occurred in the Jiroft area in the spring of 2000, exposing thousands of ancient graveyards in the area and leading to the local looting of artifacts, says Meier.

Small numbers of these vessels, made of chlorite stone, ceramic and bronze, had been found in other contexts in parts of the world contemporary with Jiroft, but the looted artifacts and subsequent excavations revealed they occurred in much larger numbers in southern Iran.

Metallurgy was another specialty of the Bronze Age culture. Meier, an archaeo-metallurgist, says that Jiroft blacksmiths created bronze out of a type of alloy between copper and arsenic similar to another nearby site, but different from the copper and tin that most civilizations used. Evidence of this industry has been discovered in Jiroft, Meier says, but researchers still aren’t sure exactly how craftsmen would have worked with the toxic arsenic, which produces poisonous fumes when added to melted copper.

“We have such high rates of arsenic bronze alloys in this area when everywhere else, tin was used,” says Meier.

Other material found at Jiroft such as bevel-rimmed bowls typically characteristic of Uruk adds evidence the area was part of a large regional network. “In the early days they were in the world system,” Meier says. It’s unclear at this point what Jiroft offered in exchange for such goods, whether the dark green chlorite vessels or something else.

“Jiroft nowadays is famous for its wonderful good soil and for its marvelous oranges and citrus fruits,” Meier says, but it’s pure speculation on whether they might have also produced and traded these kinds of goods in the past.

It isn’t clear what ended the Jiroft civilization either, but the peak eras of many other cities in eastern Iran also come to an end around this time. Meier speculates that it was likely changes in weather patterns that led to the demise of the Jiroft Culture and that of the Sumerians.

“I would say it’s climatic,” he says.