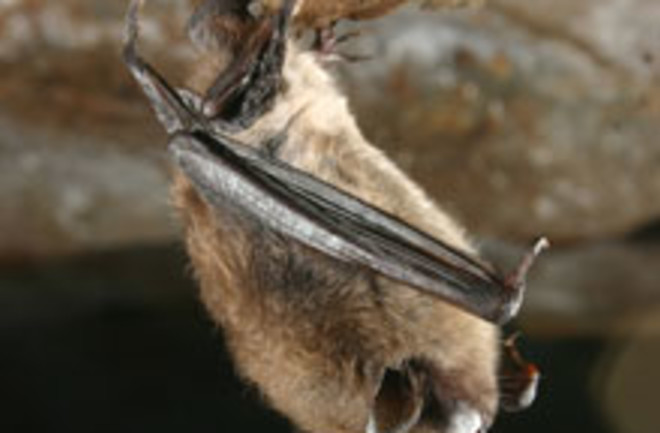 Five years ago, there were six and a half million little brown bats in the Northeastern United States. In 2020, there may be next to none. This week in Science, a study models the collapse in bat populations brought on by white-nose syndrome, which was first found in 2006 and is seemingly caused by a nasty fungus. Researchers think that bats with the affliction awaken too early from hibernation, messing up their natural cycles and draining their reserves of energy. A team led by Winifred Frick checked the math on bat population decline and found that they could be locally extinct in many parts of the United States by 2020. The loss of all these bats would be bad for us, not just them, because they like to dine on pesky insects. So far, researchers have little idea how to cure diseased bats or stop the blight from spreading. The U.S. Forest Service last month proposed to close off abandoned mines in several states, hoping to protect the bats who live in them from the disease. For more about the bats, check out Ed Yong's Not Exactly Rocket Science. Become a fan of DISCOVER on Facebook. Related Content: 80beats: Frog Species Are Hopping Into Extinction Before They're Even Discovered 80beats: Bats Are Dying from White Nose Mold, But Researchers Aren't Sure Why 80beats: With Chirps and Trills, Bats Sing Love’s Sweet Song Not Exactly Rocket Science: Pocket Science – lessons from spongy genomes, and a deadly bat-killing diseaseImage: Al Hicks, NY DEC