Bats Are Dying From White Nose Mold, But Researchers Don’t Know Why 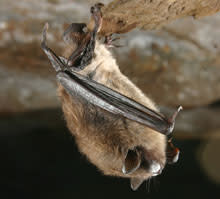 Researchers have gathered some clues to solve the mystery of what's killing off hibernating bats throughout New England, but say they're still far from knowing how to halt the strange die-off. In a new study, researchers identified the characteristic white fungus that has been found on the noses of dead and dying bats, and say it's a new species of mold that thrives at low temperatures like those found in caves in the winter. But debate still continues over whether the fungus is the cause of death, or simply a secondary infection that takes advantage of bats with already weakened immune systems.

Bats covered with the fungus, a sickness now called white-nose syndrome, were first spotted in Howes Cave near Albany, N.Y., during the winter of 2006. At that time, field biologists reported caves that were typically covered with hibernating bats had loads of vacancies.... In one case, a cave floor was littered with dead bats [LiveScience].

Since then, the epidemic has spread throughout Connecticut, Massachusetts, Maine, and Vermont, with 80 to 100 percent of bats dying in some caves. As reported in Science [subscription required], the researchers genetically analyzed the fungus and found that it's a previously unknown

member of genus Geomyces, which typically colonizes the skin of animals living in cold climates [The Scientist].

The fungus is found on the muzzles, ears, and wings of dead and dying bats, which are also found to be emaciated.

The emaciated bodies of affected bats add to the puzzlement. It's possible that some other factor is causing the bats to waste away, or that a pesticide could have wiped out their usual insect prey,

keeping the bats from fattening up before entering caves for hibernation. Their emaciated bodies would then be susceptible to invasion by the fungus [LiveScience].

Another possibility, researchers say, is that the fungus is a severe skin irritant that

bothers the bats so much they wake up to groom themselves during the exact time they need to be conserving energy to make it through the long winter. In Vermont, Massachusetts, New York and Connecticut, hundreds of skinny bats last winter were found weakly flying in the middle of the winter day -- possibly looking for food [Boston Globe blog].