While shark attacks from blue sharks are rare, humans do occasionally come into contact with these well-traveled sharks. 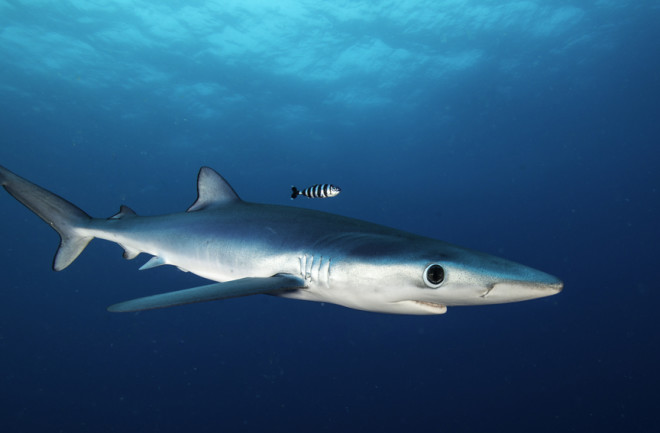 A snorkeler off the coast of Cornwall recently experienced a minor bite in the leg from a blue shark while with the tour group, Blue Shark Snorkel. These cases are extremely rare, but they can happen, even in the U.K. The victim could walk off of the rescue boat, according to the BBC, and stated that,"I don't for a second want this freak event to tarnish the reputation of an already persecuted species.”

The blue shark could be the most wide-ranging shark species on the globe, migrating to temperate and warmer waters all year round. If you're curious about the blue shark, here are some things you need to know.

Sharks with a Slender Frame

Blue sharks get their name because they are, well, blue. Sometimes referred to as the great blue shark, they have a slender frame, and a protruding cone-shaped snout. Their dorsal fin is set further down its back, closer to the tail, and it has two long, curved pectoral fins on the side of its body. They have large, bulbous eyes, but unlike most sharks, the blue shark doesn’t have spiracles — small openings between the eye and ear that help ventilate the gills.

Besides food sources, blue sharks will travel long distances to find potential mates. Male sharks often bite female sharks during mating. Though they have thicker skin, the females still can have bite scars. Mating season is perhaps the only time you’ll see adult male and female blue sharks together. A female can have as many as 135 pups, though it’s typically around the 15 to 30 range.

Besides gender, they also segregate into groups based on age and reproduction status. According to the Shark Research Institute: Juveniles, sub-adults, mature sharks and pregnant females are typically found in different areas.

Blue sharks are pelagic, meaning they mostly live in the open ocean away from the shore, coast and bottom. Because they prefer temperate waters, you’ll most likely find sharks closer to the surface and typically no more than 1,100 feet below the waves. However, they will have their pups offshore. They eat mostly pelagic fish (cod and herring), squids and the occasional sea bird.

Blue sharks often end up as bycatch from commercial fishing vessels. Though some are released back into the water, many die from shock and stress. While their meat isn’t valuable to fish markets, their fins are. Poachers will often remove the shark's fins and throw the body back into the water. The shark fins are then sold for shark fin soup, or as decorative pieces for the home. Blue sharks are especially sought out because of their beautiful color.

Blue sharks, along with other marine life, are victims of overfishing and bycatch that have caused their numbers to dwindle.